Home Entertainment Platoon 3: Which side of the upcoming Splatfest should you be on? 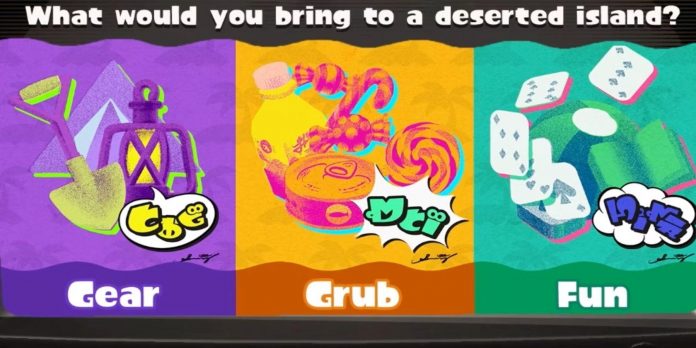 Almost a week has passed since the launch of Splatoon 3, and on September 23, the first official Splatfest is already taking place in the game. Splatfest is a special event held in the Splatoon universe, where both Splatoon and Splatoon 2 allowed players to choose between two sides (pancakes and Waffles, for example) and compete in Turf War matches. The winner of Splatfest will be determined by the number of players who chose a side, as well as by the number of wins that these players had.

Splatoon 3 returns Splatfests with some changes. Being the third installment of the franchise, the game includes three sides with a new Tricolor Turf War mode. The theme of the first Splatfest after launch revolves around things that people will bring to a desert island, with Gear, Grub and Fun being the three sides to choose from. Splatfest may be intimidating for beginners, but it’s actually similar to most of the usual Splatoon 3 modes.

Explanation of Splatfests in Splatoon 3

Splatoon 3 has three different variants of Splatfest Turf War: Open, Pro and Tricolor. Both Open and Pro work similarly to Normal and Pro modes in Splatoon 2. Open Mode allows players to either start the game alone or join friends before they team up with random teammates to fill empty slots. Pro gets rid of ready-made teams and places players with three random players; forcing complete strangers to work together to win.

Tricolor is the newest Splatoon 3 combat mode in Splatoon 3, which becomes available only after the break report. In the game mode, the four players on the side of the winner of Splatfest are in the center of the map, and both opposing teams are on the outskirts. The goal of the winning side is to hold as much territory as possible, while protecting the Ultra Signal — a device that triggers the Sprinkler of Fate, painting a large area in the color of the one who touches it. The losing teams (consisting of two players on each side) must cover the map with as much of their color as possible, while simultaneously trying to get to the Ultra Signal. They need to work together to overtake the winning side of Splatfest — a mechanic that allows cooperation and gives the losers a chance to catch up.

Choosing a side at the Splatfest

As mentioned, the first real Splatoon 3 Splatfest will revolve around what people can bring to a desert island. “Gear” can refer to many things. This can mean survival gear such as ropes, tents, and even Inklings’ own weapons—items that can make survival on a desert island much easier. It can also mean means of communication, such as radio or flares. You can even go further and say that this word refers to transport, such as a boat or an airplane, but in any case, it seems that Gear is the side for those who want to be practical in order to stay alive.

Fun is the opposite of Gear, it’s all about having a good time and getting the most out of it. Entertainment includes things like music players, beach toys and bathing suits. Staying on a desert island should not be a complete doom and gloom, and those who choose Fun will enjoy the separation from civilization.

Grub looks like a golden mean between Gear and Fun. The side is pretty clear; it refers to the food and drink that will help prevent the Inklings from starving to death. Not all uninhabited islands have an abundance of edible food and drinking water, so having food will help you survive and make life more bearable. All sides have their valid points and they will be very happy on a desert island, but no matter which side the players choose, they must make an effort and win the upcoming Splatfest Splatoon 3.

Charlie Hunnam Wasn’t the only “Fifty Shades of Grey” star who...