Home Science A Planet, 300 Times of the Earth Mass, Discovered 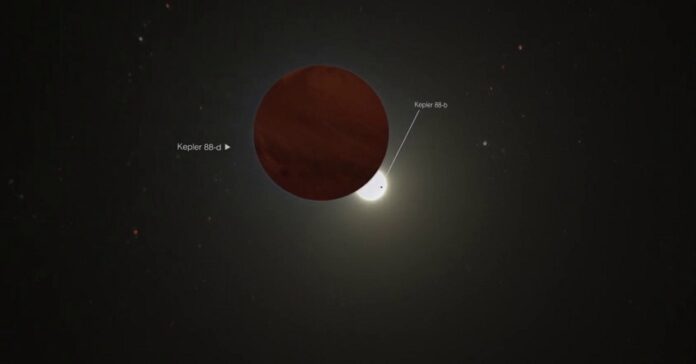 Astronomers have discovered a planet with 300 Earth masses orbiting the star Kepler-88, located 1,250 light years from our Solar System. The planet also triples Jupiter, the largest planet in our system.

Jupiter is the largest and somewhat frightening planet of our Solar System. So big that our Earth can fit in a single storm inside. It was understood that this huge planet, known as the biggest celestial body after the sun for many years, was not very big when we turned our eyes a little far.

Astronomers have discovered a new planet that revolves around the star Kepler-88, 1,250 light years away from us. This planet is much larger than Jupiter, whose size we have just praised. The planet, which is determined to be equal to the mass of 300 Earth, also doubles the mass of Jupiter to 3.

The planet named “Kepler-88 d”, which emerged with a new research published in The Astronomical Journal, revolves around the previously identified star Kepler-88. In the researches conducted at the WM Keck Observatory in Hawaii, it was noticed that one more planet was accompanied by two external planets, Kepler-88 b and Kepler-88 c, which were previously discovered.

Orbit is different
Being such a big planet brings with it some responsibilities. Normal planets revolve around its star at an angle. There may be some minor or convergence in this process, but this is usually minimal. Kepler-88 d, which even pushes its star with its size, follows a slightly different orbit. The huge planet moves in an elliptical pattern instead of circling its star. At this point, the planet moves slower as it moves away from its star, and it gains speed as it approaches. This trajectory is constantly repeating.