Following in the footsteps of competitors like Darkroom, Pixelmator has just announced its Pixelmator Pro 2.0 for macOS. Being considered by the company the biggest update ever made to the application, version 2.0 offers several Artificial Intelligence features and its main highlight is the support for Apple Silicon M1, announced last week.

Pixelmator Pro 2.0 comes with a completely redesigned interface, aiming to make its use a very intuitive experience. In the developers’ words, “almost every tool, menu and button has been updated to make the app more intuitive and fun to use”. Other than that, there is a lot of freedom for customization, being possible to modify the list of tools and their toolbar, and choose between four work presets: photography, design, illustration and painting. 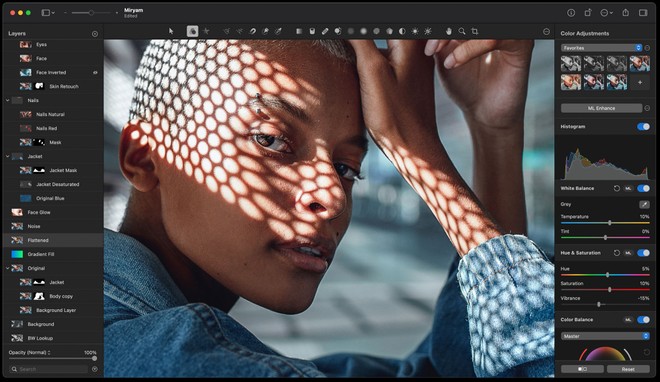 In terms of technology, the new version of the editor is built on the basis of Apple’s Metal API, and thus takes advantage of the processing power of the Apple Silicon M1. According to Pixelmator, resources that use Machine Learning, such as ML Super Resolution, can be processed 15 times faster on the Apple chip. The app is universal, however, and continues to function normally on Macs equipped with Intel processors.

Regarding the tools, the update offers a new effects browser, preset browser with more than 200 of them available, seven new collections of color adjustment presets and eight new collections of effect presets. Completing the changes, there are several tools that use Artificial Intelligence, able to enhance the photos automatically.

Pixelmator Pro 2.0 Junipero will be released for macOS next Thursday, November 19, and is a free upgrade for those who already have the app. For new users, the program comes at the same price as previous versions: $ 39.99

MILEY CYRUS AND LIAM HEMSWORTH ARRIVE TO A DIVORCE AGREEMENT

The business processes of Brisa, which moved to Teams, have increased...

Fortnite Season 4: all the challenges of Week 1

Where are the Fundraisers at Genshin Impact; location