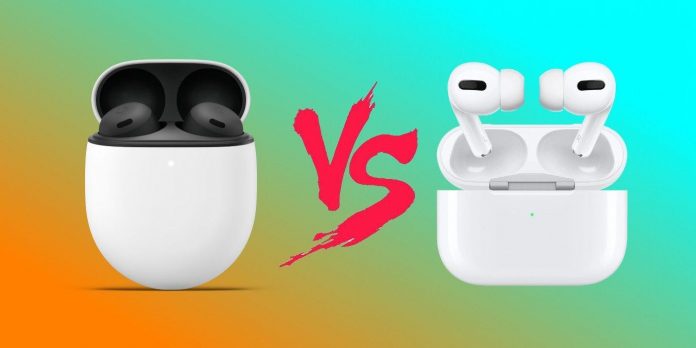 Pixel Buds will also soon receive another contender in the form of Galaxy Buds Pro 2, which will be presented along with Galaxy Z Flip 4 and Galaxy Z Fold 4 at the upcoming Samsung Galaxy Unpacked event. The new headphones will be the successors to the Galaxy Buds Pro 2021.

Both headphones have a closed design and an IPX4 rating, but their overall appearance contrasts. For example, AirPods Pro has a shackle that sticks out of the ears when worn, and Pixel Buds Pro has a round shape without a shackle, like LinkBuds S from Sony. Another key difference in their design is their weight. AirPods Pro is lighter – each earphone weighs 5.4 grams. On the other hand, the Pixel Buds Pro is almost a gram heavier — 6.2 grams per earphone. Google has also chosen a two—tone color scheme and offers headphones in four colors – charcoal, coral, foggy and lemongrass. This gives customers several options to choose from, unlike AirPods Pro, which can only be purchased in white.

The Pixel Buds Pro and AirPods Pro use 11 mm speaker drivers and replaceable silicone tips. Another common feature of both pairs of headphones is support for active noise reduction (ANC) with transparency mode. In addition, Google headphones have three microphones, and AirPods Pro has two. The additional microphone should lead to better noise reduction on the Pixel Buds Pro. They also support touch control, so users can control playback and calls, as well as switch between noise reduction modes. Unfortunately, there is no touch control on the AirPods Pro to adjust the volume unless the user calls Siri or adjusts it on their phone.

Although Pixel Buds Pro and AirPods Pro are compatible with Android and iOS devices, their capabilities depend on the device. Some features of Pixel Buds Pro, such as Fast Pair, Google Assistant, Audio Switching and Find My, only work on Android phones and tablets. The accompanying Pixel Buds app is also not available for iOS devices. On the other hand, AirPods Pro also restricts some functions to Apple devices only, for example, the ability to configure touch controls, spatial sound, automatic device switching, monophonic playback and “Hello, Siri”. In addition, Android users cannot check the battery life of their AirPods Pro on their phones without the help of a third-party app and cannot update their AirPods on an Android device. Another area where both headphones differ is battery life. The battery life of the AirPods Pro is five hours (4.5 hours with noise reduction enabled) without recharging, and with a charging case — up to 24 hours. On the contrary, the Pixel Buds Pro has a battery life of 11 hours (seven hours with ANC enabled), which in total increases to 31 hours with a charging case (20 hours with ANC enabled). Although both support wireless charging, the AirPods Pro case has a Lightning port for wired charging, and the Pixel Buds Pro case has a USB-C port.

Both the Pixel Buds Pro and the AirPods Pro are pretty good headphones in terms of the features they offer. However, the Pixel Buds Pro is better in terms of battery life. It is also the best choice for Android users as many features are available when connected to an Android smartphone or tablet. They’re also $199 cheaper compared to the AirPods Pro, which retails for $249. The same applies to AirPods Pro, as they are better suited for Apple users than for those using Android or other operating systems.