Home Entertainment Pixar forgot about it, has already told the origin story of Buzz... 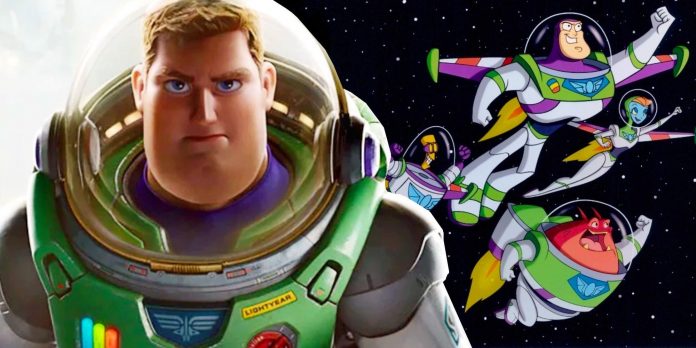 Warning! Spoilers ahead for Lightyear

While Lightyear is a fascinating look at the origins of the legendary space Ranger from Toy Story, Disney and Pixar are essentially repeating Buzz Lightyear’s storyline from his first origin movie. As can be seen from the animated film that launched the Disney animated series “Buzz Lightyear from Star Command”, Buzz’s desire to become a solo hero was the main part of this film, released in 2000. with Chris Evans in the lead role, too, the same.

Released as a video from Disney and Pixar for the launch of the animated series “Buzz Lightyear from Star Command”, in the movie “Buzz Lightyear from Star Command: The Beginning of Adventures” Tim Allen returned to voice the main character, whom he portrayed in two films “Toy Story”. Already enlisted as a space ranger defending the Galactic Alliance as part of the Universe Defense Squad, Buzz Lightyear is one of the best in Star Command. However, he loses his partner, Warp Darkmatter, who apparently died in battle. This leads to Buzz’s determination to work alone, not interested in new teammates or getting any help. However, a nefarious plot from the Evil Emperor Zurg eventually convinces Buzz that he cannot save the galaxy alone, resulting in him forming a new team with three newcomers featured in the feature film: Robot XR, Booster Munchapper, and Princess Mira Nova. . Thus, the adventures of the Lightyear Team were depicted in the subsequent animated series, and Buzz is now voiced by Patrick Warburton in the real series.

By comparison, Buzz’s character arch in Lightyear is very similar to Buzz Lightyear from Star Command: The Adventure Begins, it repeats many of the same plot moves. Determined to handle all the challenges and threats on his own, Buzz is extremely resistant to meeting teammates who are also newcomers (Izzy, Mo, Darby and Lightyear’s robot cat, Sox). However, Zurg’s threat eventually convinces Buzz that he cannot save the day alone, resulting in him forming a new team of space Rangers by the end. Although Buzz doesn’t lose a partner like in Star Command, the character arcs are very similar, including their resolution.

It should also be noted that the framing devices for the Buzz Lightyear spin-offs and their connection to the Toy Story franchise are also reflected. The Lightyear begins with a message that Andy was watching a movie with one of his favorite toys: Buzz. Working with the same concept, Buzz Lightyear from Star Command: The Adventure Begins is arguably better, as it has a Pixar-created computer screensaver, and Andy’s toys are sitting down to watch a cartoon that inspired their friend Buzz.

Lightyear director Angus McLane commented that Pixar didn’t really consider the possibility of a canonical connection with Buzz’s TV show, but it’s obvious that many plot fragments were taken from Buzz’s original origin story. Thus, 22 years later, Buzz Lightyear got a second chance to let fans know about his origins as a space ranger with Disney and Pixar’s Lightyear. At the same time, Buzz Lightyear from Star Command and his movie “Adventure: The Beginning” are likely to continue to occupy a place in the hearts of many fans.