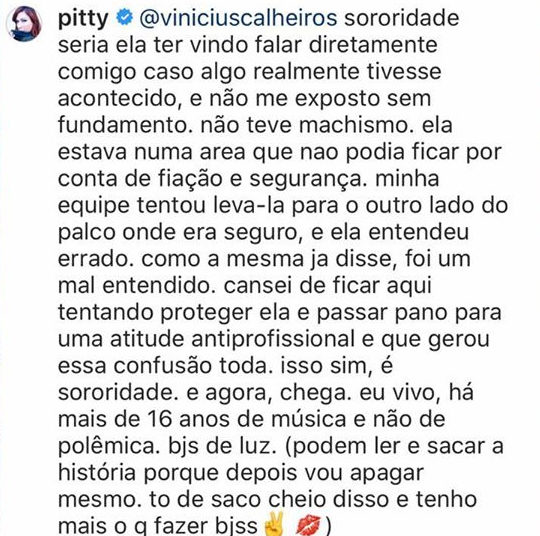 Lexa’s criticism of Pitty’s team on the Inter UNESP stage in Sao Jose dos Campos continues to resonate. Pitty spent the weekend answering fans about the controversy, usually in a friendly tone, until he lost his temper. “I got tired of trying to protect her and rinse off an unprofessional attitude,” she wrote on Instagram, “sorority would be that she came to talk directly to me if it had really happened, and not exposing me without foundation.” According to her, it was all a misunderstanding and Lexa exposed her to the public. Read:

“No, her team didn’t try to do that, so much so that when I came back to the dressing room her security guard was arguing ugly with mine, but like I said, if it was just me, I wouldn’t have said anything. The whole point was that two firefighters who saw the situation came to report what they had lived to me immediately. So I thought I really had to talk, they said to me: ‘They said that when she passed here it was not even to look at her’ Why did a blonde girl from the event apologize to me for what happened? Why do so many artists militate on TV, radio or on stage and are applauded and when they return with them is not acceptable? (and for God’s sake, IT WASN’T FOR HER) I want to make it very clear that when I spoke on stage, I took all the care in the world, I started by KEEPING Pitty and only referred to the team because of two women who were embarrassed. If you had talked to them, you would understand my position to defend them. Only that. I felt for other women. I arrived 1 hour earlier at the show just to watch Pitty’s show, we came in the van singing her songs and as I said: I never, never hurt Pitty’s honor, wouldn’t have that courage, I just referred to men who need and must know how to behave with a woman. ”

The controversy began on Friday (15/11), when Lexa took advantage of her show at Inter UNESP to tell what had happened behind the scenes. She claimed to have been beaten by Pitty’s crew when she tried to watch the singer from the side of the stage show, and said that two firefighters attending the event had also been mistreated by the rocker’s security guards. “Honestly… It was two women firefighters who were here in the corner and deserve respect. Machistas will not pass! I’m not speaking for myself, no. I’m speaking for them. I met these two firefighters in my dressing room and they reported it to me. I know Pitty doesn’t agree with that, but her team needs to look into this kind of situation, ”he said.