Home Entertainment Pirates of the Caribbean: Why Davy Jones looks like an octopus 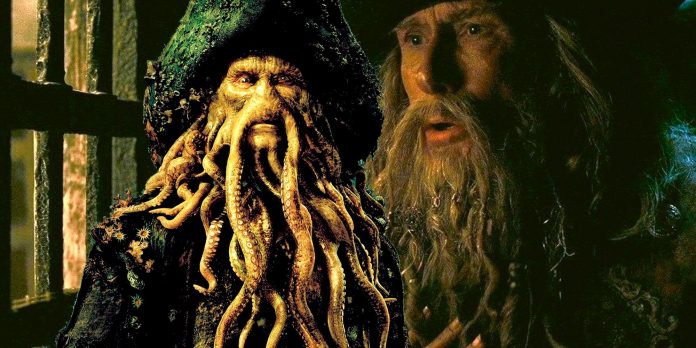 The appearance of the octopus Davy Jones in “Pirates of the Caribbean” is not accidental. Not only do his tentacles and shells make the villain impressive, they also hint at his past and personality. Bill Nighy played Davy Jones, the main antagonist of Pirates of the Caribbean in two films, but although the villain’s appearance is based on him, his more aquatic facial features were completely computer generated. The only time Jones appears as a human is during “At the End of the World” when he visits Calypso and his past is finally revealed.

Being the captain of the ship “Flying Dutchman”, Davy Jones is incredibly strong and is one of the most dangerous villains in the series. He can appear on any ship at sea, pass through solid objects and not feel pain. He can track down any soul marked with a black spot, and he is also able to summon and control the Kraken, a terrifying sea monster capable of destroying and sinking any ship at sea. However, although he is immortal, he has two weaknesses. Firstly, he can only set foot on land once every 10 years (although a bucket of seawater seems to solve this problem), and secondly, he cut his heart out of his chest. Anyone who holds his heart can control and command him.

The reason why Jones tore out his heart is closely related not only to his appearance, but also to the appearance of his crew and ship. Before becoming the captain of the Dutchman, Davy Jones’ story “Pirates of the Caribbean” was the story of a great sailor who fell in love with Calypso, the goddess of the ocean. Calypso gave him the task of guiding the souls of those who died at sea, and Jones took on this duty out of love for her. She promised that they would reunite on land in 10 years. But Calypso, like the ocean, could not be tied to anyone or anything. After ten years of fulfilling his duty, Jones returned to earth, but Calypso did not meet him.

Why Davy Jones Turned into an octopus in POTC

Betrayed, Jones decided to take revenge and helped the first pirate court tie Calypso to a human form, imprisoning her. Out of guilt for what he did, Davy Jones took out his heart and hid it in a locked chest so he couldn’t feel the pain of losing her. After that, Jones abandoned his duties as a spirit guide and instead began attacking ships and recruiting sailors who were about to die. He will save them from death if they serve him for 100 years aboard the Flying Dutchman.

Due to the fact that he abandoned his sacred duties, the fate of the Pirates of the Caribbean Davy Jones was to be slowly absorbed by the aquatic fauna and flora, acquiring monstrous features similar to tentacles. His damage affected both the ship itself and the crew. The longer the sailor served him, the less human they became, eventually merging with the ship and losing all sense of self-esteem. Although it doesn’t explicitly say how this process works, Calypso reveals that this curse is linked to Jones’ years of brutality and corruption. In the finale of Pirates of the Caribbean: At the End of the World, Will Turner becomes the captain of the Flying Dutchman, and the crew restores their human forms, assuming that the heart of the one who is tasked with transporting souls is important. If his heart is pure and dutiful, then the Dutchman and his sailors can keep their usual appearance.

Davy Jones’ backstory is one aspect of what makes the character so interesting, but another aspect is how the animation team of “Pirates of the Caribbean: Dead Man’s Chest” and “At the End of the World” managed to make the features of his octopus realistic and terrifying. Bill Nighy provided motion capture for the character, and his incredible performance is evident in Jones’ facial expression and body language. The tentacles, however, are all CGI. After Naya’s performance on the set was filmed, Industrial Light and Magic was tasked with matching tentacles that move independently, like fingers, with footage of live performances. As a result, Davy Jones from Pirates of the Caribbean is arguably the most charming villain not only because of his history in the world, but also because of how intimidating he looks.

90-day fiance: Jovi says he and Yara are going through a...