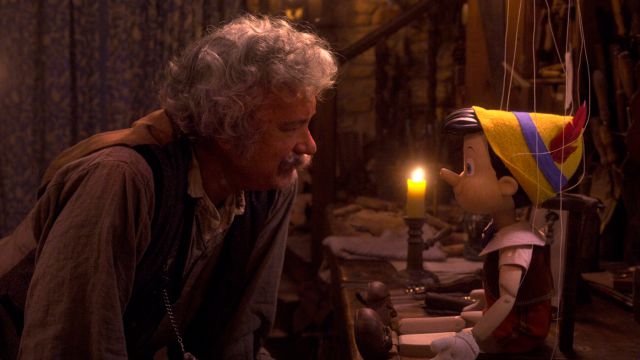 Pinocchio: Actor and director collaborate again to bring to life a new version of real action of the 1940 Disney classic; streaming premiere in September. Pinocchio, the new live-action version of the 1940 Disney classic, will premiere next September 2022 exclusively on Disney+. And we can already enjoy the first official image of this new live-action adaptation with Tom Hanks, an image in which we see the actor playing the role of Geppetto while carefully observing his new wooden puppet, Pinocchio.

Thus, the director Robert Zemeckis returns to work with Tom Hanks after his various previous collaborations such as Forrest Gump (1994), Cast Away (2000) and Polar Express (2004) to carry out a new film version of the 1883 children’s novel written by Carlo Collodi, The Adventures of Pinocchio. The script has been written by Robert Zemeckis himself in collaboration with Chris Weitz, also producers with Andrew Milano.

How could it be otherwise, Tom Hanks plays Geppetto, a carpenter who desperately seeks to have a child; Soon his wishes will come true when his new wooden puppet, Pinocchio, comes to life. Young Pinocchio will be voiced by Benjamin Evan Ainsworth, while his design remains practically intact from the original animated film, both because of his clothes and because of the puppet’s own forms and expression.

The cast is completed by Luke Evans, Cynthia Erivo, Joseph Gordon-Levitt, Keegan-Michael Key and Lorraine Bracco. All this in September on the Disney streaming platform. Recall that the 1940 animated film Pinocchio became the first animated film to win an Oscar, also, twice, for Best Song and Best Original Soundtrack.

Netflix will premiere this year its own version of Pinocchio by Guillermo del Toro, although this time with stop motion techniques, with voices by Ewan McGregor, David Bradley and Gregory Mann.