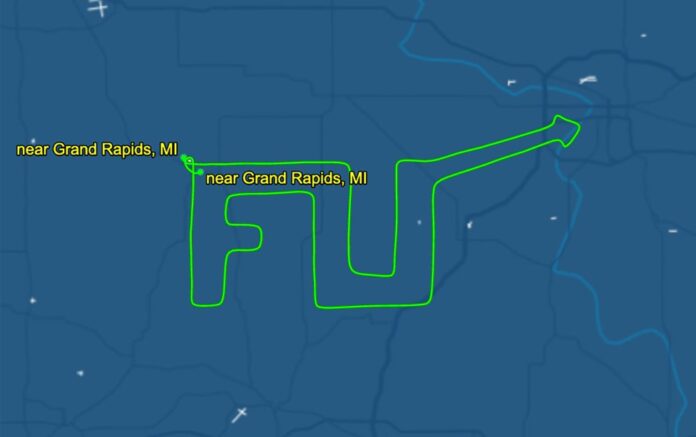 Due to the coronavirus, the governor, who extended the quarantine period by 1 month throughout the state, gathered a reaction. A pilot living in the province stated his system to the decision of the governor by writing an arrow in the sky with his plane, drawing an arrow pointing to the governor’s mansion.

April 23 National Sovereignty and Children’s Day celebration in the past week, along with the 100th anniversary of the Turkish Air has signed a policy Ways and drew the heavens on the history of the world’s largest Turkish flag Turkey.

This unique event we witnessed live in Anbean brought up the idea that some thoughts can be expressed in the sky with the route of the planes. A pilot living in the USA explained the system to the governor in his own way, which extended the quarantine period despite the coronavirus pandemic that affected our world by using this method.

The pilot swore at the governor’s plane, which extended the quarantine period
Pilot Ed Frederick, 45, who lives in the state of Michigan, USA, previously announced a special flight lasting about 1 hour after the announcement of Governor Gretchen Whitmer, who tried to minimize the spread of the virus while continuing to show coronavirus effects, until May 28. watched on his planned route.

Drawing the letters ‘F’ and ‘U’ on the map with the planned route, Frederick added an arrow beside these two letters. Pointing precisely to the mansion of Governor Whitmer with the arrow sign, Frederick showed that he swore to the governor with the expressions of ‘Fu * k’ and ‘You’ he had drawn before.

Stating that this is a show of strength, Frederick said: “The government officials are making decisions without thinking about the results to prove that they are doing nothing, regardless of which party they are from.”

The pilot, who is also the owner of a small business with his sister, said he believed that quarantine was unnecessary throughout the state of Michigan, since the majority of cases were located in the southeast region of Detroit, a city in Michigan.

The most searched pandemic questions on Google