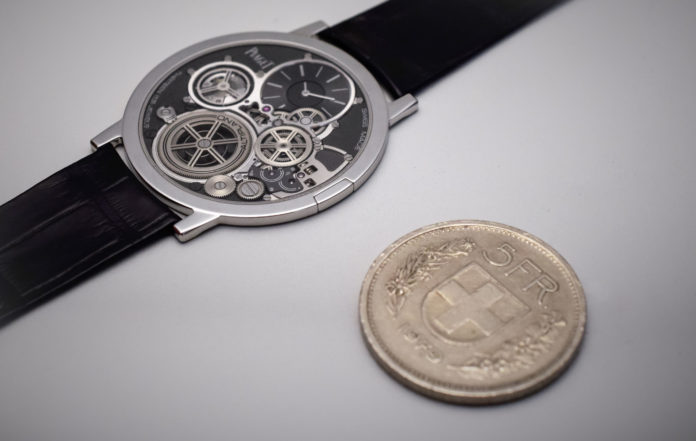 Swiss luxury watch and jewelery company Piaget, which designs, develops and produces mechanical watches within itself, is among the pioneers of high precision extra fine mechanisms. Operating under the umbrella of the Geneva-based Richemont Group, the brand has announced its new anticipated new mechanical watch called Altiplano Ultimate Concept.

Having the title of the world’s thinnest mechanical wristwatch with its dimensions of 41mm x 2mm, Altiplano Ultimate Concept was first introduced in January 2018, but the final design of the watch has been announced as of today. Stating that the watch took four years to manufacture, the Swiss brand says that they had to create a new design method to realize this incredible concept.

Altiplano Ultimate Concept is only 2mm thick
Built on a cobalt alloy body, the watch has an ultra-stylish look. Almost as thin as paper, the Altiplano Ultimate Concept reveals its caliber, called 900P-UC, with all its nudity. In addition to carrying traces from the 146-year heritage of Piaget, the wristwatch, which comes with a very modern and modern silhouette, attracts a lot of attention with a wrapping crown integrated with the body and a cobalt blue strap made of technical fabric.

In addition to carrying traces from the 146-year heritage of Piaget, the watch has a highly contemporary and modern design.
Indicating that Altiplano Ultimate Concept, which is the thinnest mechanical wristwatch ever produced with a thickness of 2mm, is no longer an ambitious experiment in overcoming the limits of micro-engineering, but also a product that watch lovers and collectors can have, is a groundbreaking design. says they signed.

The Swiss brand has not yet announced the price tag of its four-hour luxury watch, but Altiplano Ultimate Concept is now listed on Piaget’s official website. You can watch the video below to take a closer look at this impressive clock.