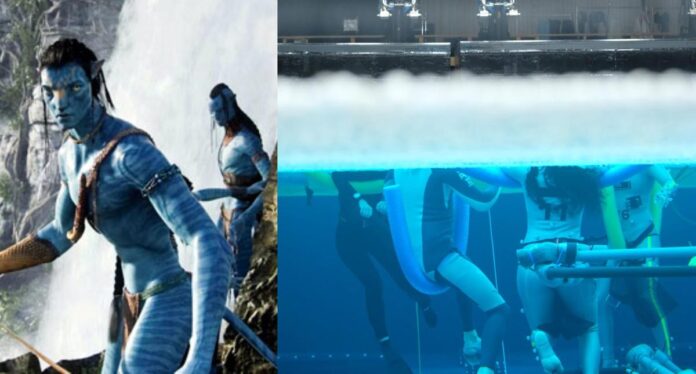 The producer of the Avatar 2 movie Jon Landau shared two photos from the set of the highly anticipated sequel. The photos show that James Cameron directed the underwater scene above a swimming pool.

Avatar of James Cameron’s legendary science fiction movie returns years later with his sequel. Avatar 2 is preparing to take us back to the magnificent atmosphere of the Pandora planet. New photos continue to come from the set of the film, which is planned to be released next year.

Avatar 2’s shots in New Zealand were suspended last month due to the coronavirus epidemic that influenced the whole world. The film’s producer, Jon Landau, is trying to keep the excitement high by sharing two new photos from the set of the film, directed by director James Cameron’s cast in the swimming pool from above.

New photo shared from the set of the movie Avatar 2
The first set of photos from 2017 shows shots of one of the underwater scenes of Avatar 2 in the swimming pool. Six young actors and a seven-year-old boy starred in the stage, directed by James Cameron from a high platform. The actors have been trained on how to hold their breath for 6 months for underwater scenes, and they can all hold their breath for 2 to 4 minutes. Moreover, no oxygen cylinder was used in the scenes.

In the second photo, it is seen that James Cameron gave directives to the players from above. Also for those who are curious about the white things on the surface of the pool; small white balls used to prevent lights’ motion capture systems from affecting performance.

The factor that creates the biggest problem with water is not the underwater part, but the transition interface that creates a moving mirror between air and water. If balls are not used, reflections in the water may mislead the motion capture system by reflecting all points and marks. In addition, thanks to the balls, players can safely come to the surface if needed.