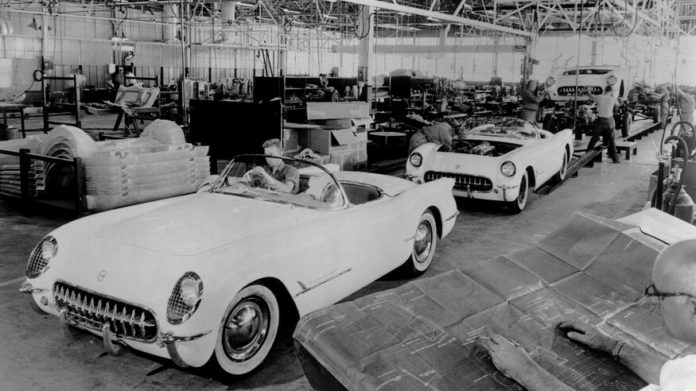 Chevrolet, which is under the structure of General Motors, recently released the image of the first C8 Corvette that came off the assembly line. This special version of the 2020 model vehicle was purchased by Rick Hendrick for approximately $ 3 million (TL 18.1 million) as part of an aid campaign. Corvette, one of the most luxurious vehicles of today, has attracted great attention in the past as it is now.

Motor Trend investigating the archives of General Motors; Flint reached photos of a Corvette manufactured in 1953 on the Michigan assembly line. According to the information in the images, this photo, taken on June 30, 1953, reveals how luxurious the vehicle was in the past. You can also compare this 1953 vehicle with the 2020 Corvette C8, which came out of the Bowling Green Assembly Plant on February 3.

The new Corvette C8, which will not be delivered until the end of February, will be the first mid-engine Corvette. The new Corvette’s Stingray model will have a 495 horsepower and 637 Nm of torque, along with a 6.2-liter V8 engine. The car’s design, technology and engine positioning will be the most distinctive of the Corvette models ever produced.

NBA Can Use NBA 2K Audio Files As Fans Sound In...