Home Music News Phoenix live in London: another stunning attack on the senses 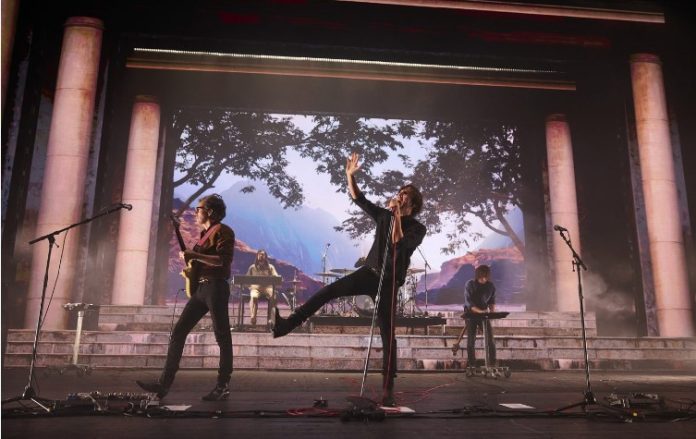 November 16, O2 Academy Brixton: Utilising the tricks of their “digital opera” set, the French band’s commitment to preserving and enhancing their buoyant indie-pop anthems is endearing.

Phoenix have always been a pleasant group that was difficult to define. Arriving at the end of the fading scene of the 90s with a love of soft rock and cheesy electro-pop, the band spent the next 10 years searching for a place in the upper echelon of indie. “Wolfgang Amadeus Phoenix” from 2009 and his hit singles “1901” and “Lisztomania” have done their job, and now they are vacillating between cult status and a truly popular prospect.

Their latest album ‘Alpha Zulu’ didn’t make much of an impact on the charts, but don’t worry: their return to the O2 Academy Brixton, their first UK performance in over five years, was sold out and well deserved. imbued with the spirit of a noisy party.

The album “Alpha Zulu”, recorded in the Louvre Palace in the heart of Paris, showed that the French band has reached the peak of their career: two decades later they are still finding ways to move their sound forward and add new colors to the palette. But they have long thrived on their live performances. The “Ti Amo” tour in 2017 used mirror tricks for a dazzling impression, and today’s new setup, in which frontman Thomas Mars was modeled after the idea of a “digital opera,” goes even better: it’s a complete assault on the senses.

Using staggered screens framing the stage and the band, Phoenix intelligently uses the full depth of the performance space. During their second song, “Entertainment”, they recreate the Palace of Versailles and its Hall of Mirrors, its chandeliers flickering against the background of the thunder of keyboards. This is one of the many moments that cause the oohs and aahs of the crowd when the full potential of the screens is revealed: even the simplest tricks, such as the sliding of bright colors on the stage (“J Boy”) or the image of a beautifully exploding fireworks (“Winter Solstice”) works wonders.

There are definitely human moments. Mars recalls their first London gig at the now defunct Tokyo Joe’s club, which he says was so bad that, he says, they felt unwelcome in the capital for years after that. During the next song (“Lovelife”) Mars sings the wrong verse and asks to restart the track — nerves are still in place, clearly. During “Telefono” and “Fior di Latte”, two of their most sumptuous and juicy ballads, Mars straddled bassist Dec D’Arcy’s harpsichord in a stripped-down and very enjoyable moment. Meanwhile, the tribute to their late friend and collaborator Philippe Zdar during “Identical” is restrained but powerful.

Reactions to “Alpha Zulu” tracks, such as its title track, the rave track, and “Tonight” (where his bouncy bass part is overflowing with beer chants) suggest that Phoenix’s loyal audience doesn’t just stay: she’s thriving. Today’s stunts and stunts on stage will prove to be an exciting bonus that cannot be missed.