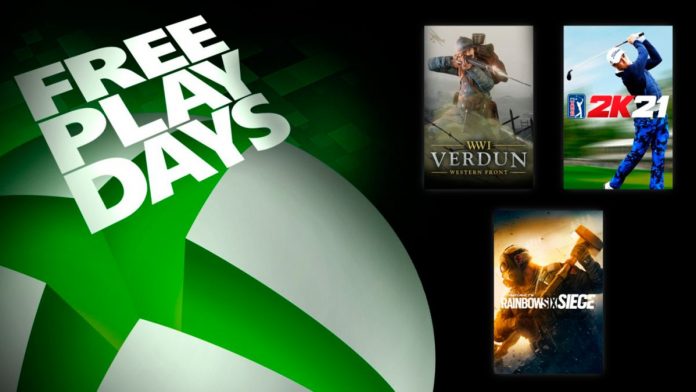 PGA Tour 2K21: Microsoft’s regular Free Play Days promotion features titles available to play for free with Xbox Live Gold or Xbox Game Pass Ultimate. As usual every week, Microsoft presents the games to play for free during the weekend as part of its Free Play Days promotion, available on Xbox consoles with an active subscription to Xbox Live Gold or Xbox Game Pass Ultimate. And the three main titles this week are PGA Tour 2K21, Rainbow Six Siege and Verdun, available from now until next Monday, June 21 at 8:59 a.m. And how could it be otherwise, Microsoft offers interesting discounts on all three games for those who want to continue playing after the trial period.

Big discounts at the Microsoft Store

We start with, surely, the best known of the main trio of this weekend’s Free Play Days, which is none other than Rainbow Six Siege, the popular first person shooter with a tactical cut and competitive online games in which two teams of five against five fight to dominate the stage. A game that has grown dramatically over the years since its launch in both content and players and is now at its best. And it is also offered with a 70% discount, staying at only 8.99 euros.

We continue with another game from a mythical franchise, although in this case of sports and focused on golf. This is PGA Tour 2K21, the latest installment of the well-known simulator in which we compete against the best golfers in the world on fields recreated to the millimeter based on real scenarios. Cold blood, concentration and precision to achieve the best scores in all international championships. And again, it can be purchased at the best price thanks to a 67% discount, remaining at 19.70 euros.

We finish with Verdun, another FPS that this time takes us to the ruthless armed confrontations of the First World War through a most realistic setting and a demanding but very satisfactory gameplay. In addition, it can be purchased for only 7.99 euros thanks to a 60% discount.

Codemasters (F1, DIRT) announces the departure of two of its top...