Home Entertainment Pete Davidson is the new face of, among other things, the Manscaped... 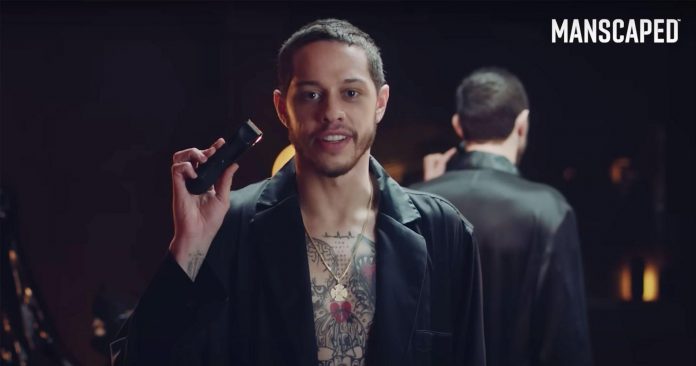 Pete Davidson uses his comedic talents in the world of beauty! The actor is the new face of the Manscaped men’s cosmetics brand, and he wants everyone to say: “Shave, baby.”

In the label’s new lifestyle ad, released on Monday, July 11, 28-year-old Davidson advertises a Manscaped Lawn Mower 4.0 trimmer with lots of funny quips. “This is Pete Davidson from Manscaped,” the Saturday Night Live graduate begins in the commercial, before bursting into laughter. “Let’s show them, boys, how hairless we can be,” says Davidson, dressed in a black satin robe.
The “King of Staten Island” star later emphasizes: “Presentation matters” by adding: “Don’t make me be specific, because I will do it.” Then he jokes, “Shave, baby!”
In the next scene, the New York native turns around to use the device, exclaiming, “I have a hot date.” He then shares that he has been using Manscaped “long enough, and I think it’s time to do business together.”
The commercial ends with Davidson saying, “Meet a new face, among other things, Manscaped.”
Manscaped has announced that the Big Time Adolescence star has signed a four-year partnership with the lifestyle brand. In his new role, Davidson will star in commercials, advertising campaigns and deliver “a lot more laughs” to customers. The comedian is also a shareholder of Manscaped.
Kim Kardashian and Pete Davidson couple’s Style: from identical blonde hairstyles to Met Gala Glam
Read the article
“Pete is the perfect brand partner for Manscaped. Both his sense of humor and sense of self closely match the voice and values of our brand,” said Paul Tran, founder and CEO of Manscaped, in a release. “One of these core values is not to take yourself too seriously; it makes our brand accessible and allows us to establish genuine connections with our fans. We are so lucky to work with Pete, who is incredibly talented and has a natural ability to communicate equally with men and women around the world.”
In addition to the trimmer, Manscaped offers shaving creams, deodorants, colognes, boxers and much more.
Although this is Davidson’s first beauty partnership, he is no novice when it comes to maintaining his appearance.
The actor’s girlfriend, Kim Kardashian, was thrilled with his love of skin care during the episode of Hulu The Kardashians, which aired on June 2.
The official chronology of Kim Kardashian and Pete Davidson’s relationship
Read the article
“I never knew that you could be so happy watching TV shows and going to the gym. I don’t really care if I go out [in workout clothes] without makeup. It’s the most refreshing feeling,” the 41-year-old Kardashian shared. “I had a big pimple on my nose and I kept complaining [about it] and saying, ‘Oh my God, I need to get up, I need to apply acne medicine… One thing we seriously have in common is that we are obsessed with skin care products and cosmetics”.
The Skims founder continued, explaining that before she could apply the cream, she fell asleep. However, Davidson came to her rescue. “I woke up in the morning with a cure for dried pimples on my nose… like, he applied it to me in a dream because he knew that I really needed it to disappear,” she added.
In a candid interview, the author of “Egoist” said that their relationship arose after she hosted SNL in October 2021. After that, she got Davidson’s number from the show’s producer. “I wrote to him… I just thought, “I’ve heard about this BDE. We need to get out,” Kardashian joked.

Seth Rogen Will No Longer Work With James Franco After Controversy;...

New Feature Is Coming to Twitter You Can Make Money