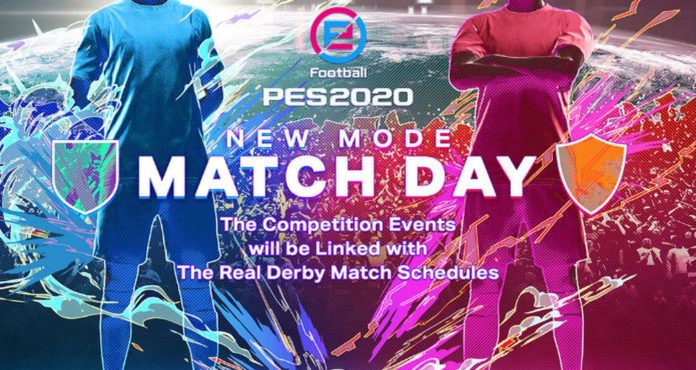 PES 2020 is the latest Konami football simulator game. Available for download on PC, PlayStation (PS4) and Xbox One, the game features the competitive Matchday mode, which consists of events for limited time and times when the player plays matches inspired by rivalries of the real football calendar. Here are five tips you need to keep in mind to master the matchday and beat your rivals.

Matchday is a new mode in the Pro Evolution Soccer franchise and made its debut in PES 2020. Available to play on all platforms, the mode happens according to Konami’s calendar of events, which goes through constant date rotations, always informed in the game’s home menu as soon as you load it. A good performance on Matchday brings rewards for other game modes, such as points to invest in your team on MyClub, for example. So it’s worth playing for both fun and bonuses.

Evaluate your team of the day
At Matchday it is important to be aware of your lineup, as some athletes are better than others thanks to the customized casts of the mode. There will always be two team options to join, so choose the one you’re most familiar with. During matches, it is important to pay attention to the attributes of the stars to make the most of their virtues and try to minimize their weakest points. Do not hesitate to change the tactical formation before the game starts to leave the team completely to your liking, or to make substitutions, both before and during the matches.

Practice all dribbling fundamentals
PES 2020 has a robust training mode for players to exercise the basic and advanced fundamentals of football, so it’s worth practicing. On Matchday, knowing how to do effect dribbling and making the right passes have even more weight than in other game modes, as players often have only one great chance to score to resolve the match.

Before playing Matchday, spend a few hours practicing the more advanced PES 2020 dribbles, which make use of the joystick’s two directional analog keys. So, surprise the other team by opening spaces where no one expected it to be possible to create a move and leave the teammates in the face of the goal.

Value ball possession
Winning the mind game is essential in any electronic sport, and one of the most important parts of mastering online games. A player will have an advantage if he can also destabilize his rivals. A good way to do this in PES 2020 is to exchange many passes in a row without making a mistake, ensuring that the other team does not have possession of the ball and chances to shoot on goal.

Don’t be ashamed to wax when you’re ahead of the scoreboard, as every minute counts. If necessary, a player can hold the ball alone in the attack field near the corner flag to dig fouls, or exchange passes in the middle. This usually causes the rival team to tighten the scoring, which opens up even more space to arm lethal attacks.

Avoid your players’ fatigue
As usual in PES games, you need to take extra care with the players’ breath, as you will need to reach the end of the game in the best possible physical condition. Avoid unnecessary running or moving all the time so as not to wear athletes out.

It is a good idea to leave the three substitutions saved for the second half, and then put on three new midfielders or strikers, with enough breath left to enter around 60-65 minutes. This will help to disrupt the rival defense, who will also be tired and will not have legs to keep up with faster players.

Caprice in set pieces
One of the best ways to score goals on PES 2020 Matchday is to capitalize on set pieces, be they penalties, fouls or corners. If the player uses training mode enough, he can turn every foul situation near the area into a golden chance to score goals.

If you’re taking corners, try hitting the first or second stick, not the middle of the area, as this increases the chances of a teammate being free to head or kick. In the fouls, practice a lot to shoot in the opponent’s angle. With the right strength, the move is virtually indefensible.

Koenigsegg to go to Geneva with Mission 500 Concept that can...