Home Entertainment Persona 4 Golden: How to get a fishing rod 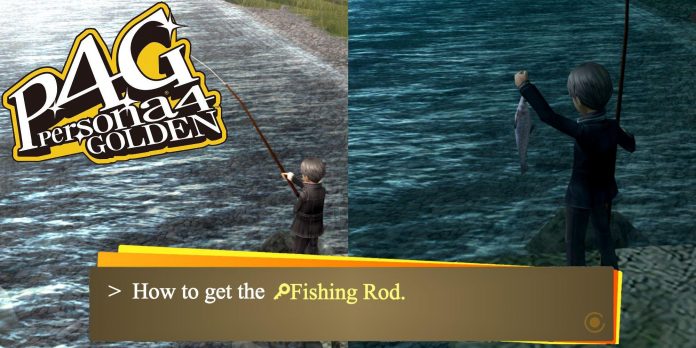 Fishing is a minigame within Persona 4 Golden that more than a few players are likely to miss on their first playthrough. Unlike Persona 5/Royal, there are several quests that require fishing, but players will notice they need to first obtain a fishing rod. Players won’t be able to buy this at Daidara Metalworks, and, since getting the fishing rod can take a few in-game days, it’s important to start the sidequest as soon as possible.

It isn’t necessary to unlock fishing just to complete Persona 4 Golden. However, players will need to get the fishing rod if they want to max out the Hermit Social Link, which unlocks on May 5th.

RELATED: Persona 4 Golden: How to Get Izanagi-no-Okami

Getting the River Rod

The drinks in the vending machines restore 5SP, so stock up on them for the first dungeon if possible.

With the right drink, return to the Shrine and speak to the boy again. He’ll give Tatsuhime Ladybugs as thanks.

The second part of this quest won’t be accessible unless players have a Gem item. This can be gained from battling the Shadows in Yukiko’s Castle in Persona 4 Golden. The Bronze Dice Shadows on floors 4-7 may drop a Gem, but with any luck, players will get the required item without having to navigate to the end of the dungeon.

Once the Gem is in the inventory, go to the Shiroku Store during the evening, which is now called Shiroku Pub (only at night). Speak to Old Lady Shiroku and she’ll tell the Protagonist to leave… unless he has the Gem. She’ll take the Gem and this will give players the option to Item Exchange or Talk. Select Talk.

If players have the Tatsuhime Ladybugs, they can feed Old Lady Shiroku’s fish, Akihiko. Doing so grants players the Fish Hook key item. Now, during the afternoon, head towards the Riverbank in the Samegawa Flood Plain. Speak to the Old Man by the river, and he’ll give the Protagonist the River Rod.

Getting the Angler’s Set

Once Persona 4 Golden players have unlocked Shichiri Beach, they’ll be able to catch fish that are exclusive to the ocean. Unfortunately, the River Rod can’t be used here. To upgrade the Fishing Rod, players will need to complete Quest 60: Acquire Samegawa’s Guardian. Ask the Old Man about the Guardian and the type of bait in order to unlock the Inaba Jewel Beetles. These can then be caught with the Bug Net at the beginning of August.

With the right bait, head to the Riverbank on rainy days to fish the Guardian. Save before walking up to the “dock” to avoid wasting bait. Players will know they’ve hooked the Guardian when they see a huge splash around the bobber. Once the Guardian’s caught, show it to the Old Man, and he’ll hand over the Angler’s Set.

If players are in the late-game phase, they can catch the Guardian on any day in December or when it’s snowing.

In order to fish, players will need bait. Larger fish require rarer bait such as Inaba Jewel Beetles and Genji Beetles, while smaller fish can be hooked with more common bait like the Breadcrumbs or Tatsuhime Ladybugs. Go to the Riverbank or the Shichiri Beach and press Space/X to start fishing. It’s highly recommended to read the Beginner Fishing book (available 4/20) and the Expert Fishing (available on 6/28), to make the fishing minigame easier. Fishing also requires Diligence, and having more Diligence means the Protagonist will stay longer.

After selecting bait, press the Space bar when the bobber is pulled underwater. Then, use the left/right arrow keys (or A/D) to move the cursor along the bar. Hold down the Space bar when the cursor is in the blue. If the Space Bar is held down in the orange or red, then it’ll cause the fish to swim further away and lessen the chances of landing it. If players have read Expert Fishing, they’ll be able to reel in faster when prompted.

There are several Quests that require fishing, but the most important one is Quest 15: The Shichiri Beach Guardian. This is the last part of the Fox’s Social Link. As stated before, players will need to catch the Samegawa/River Guardian first before they can attempt fishing at the beach. To hook the Beach Guardian, the Genji Beetle bait is required. They can be caught at the Shrine at night, or players can order them from Tanaka’s Amazing Commodities on 8/22.

Go to Shichiri Beach when it’s raining. Like the River Guardian, players will know they’ve hooked the Sea Guardian when a large splash forms around the bobber. While not part of the quest, it’s highly, highly recommended to read the Expert Fishing before attempting to catch the Sea Guardian. Without the Fast Reel action, it’ll be near-impossible to complete the Quest.

Speak to the Old Man one last time after catching the Sea Guardian, and then report to the Fox to max out the Social Link. This will allow the Protagonist to fuse Ongyo-Ki in the Velvet Room.

Persona 4 Golden is available now on PSP and Steam. A PC, PS4, Xbox Series X/S, Xbox One, and Xbox Game Pass release is scheduled for 2023.

How Aliens from Aliens: Dark Descent were able to capture the...