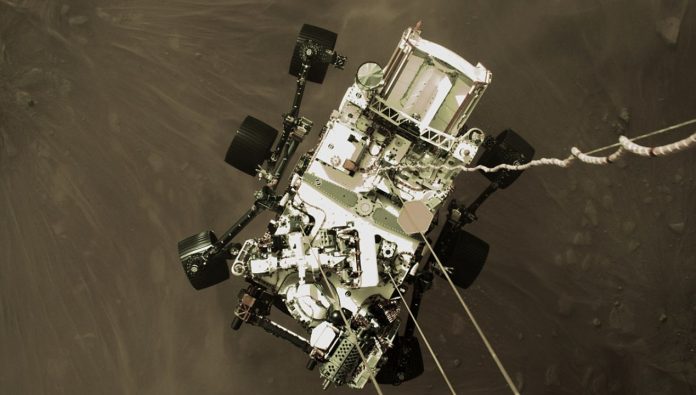 Perseverance has returned to his true mission. The traveler began searching for alien life in the Jezero Crater, which scientists consider to be an ancient river. At the end of the Perseverance mechanical arm is a camera called WATSON. Thanks to this camera, he captures detailed images of the rocks on the floor of the Jezero Crater.

Searching for microbial life in the old lake

NASA has announced that this barren basin was once filled with water. Scientists believe the crater is the location of an ancient river. The crater is important for this very reason. Because where there is water, the probability of microbial life is higher.

Perseverance had spent much of the past month documenting the historic flights of the Ingenuity helicopter. But his main job is to study the Jezero Crater. The rover’s robotic arm carries a few tools to help uncover the secrets the rocks may hold.

Scientists want to use the abrasive of the arm to reveal the underlying structure and composition of the surface when they find a particularly interesting element. The Perseverance team will gather more detailed chemical and mineralogical information using many other tools.

Over the next two years, they hope to collect and study rock and soil samples that will be brought to Earth.

Perseverance will view it with robot arms

Perseverance will investigate when the ancient lake formed, when it dried out, and when sediment started to accumulate in the delta. With all these reviews, NASA researchers will set a timeline.

These differences in geology could reveal the secrets of discovering alien life. If the rocks are deposited like sandstone and limestone, there is a higher chance that the Red Planet has preserved bio-signatures from its previous life. If the rocks were formed by volcanic activity that researchers believe could still exist, biological traces may have been lost.

Perseverance project scientist Ken Farley made a statement on this matter. “The more rocks you look at, the more you know,” says Farley. said. However, this is not an easy task. Because scientists say that the rocks on Mars are eroded by the wind. It may even be covered with sand and dust recently.

In this case, one solution in our world is to break the rock sample with a hammer and examine it in detail. However, Perseverance does not have a hammer, only robot arms. The vehicle will shoot images with its arms and collect samples if it can.