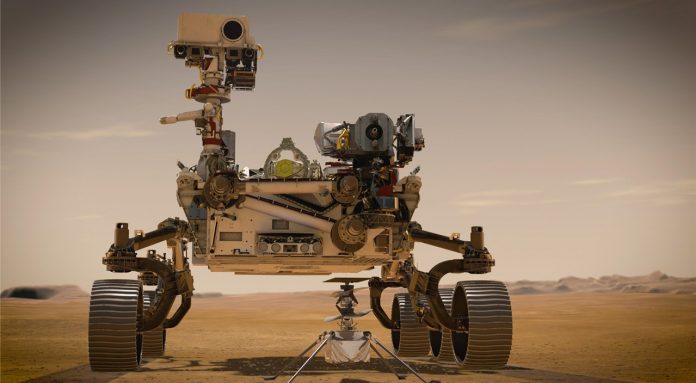 At the first press conference following Perseverance’s successful landing on Mars, scientists at NASA and JPL made statements about where the vehicle landed over the next few days and weeks and what to expect when starting its mission.

Project deputy manager Jennifer Trosper said that the Mars Odyssey orbit will provide favorable conditions for data flow in the coming days; Matt Wallace, another deputy project manager, said that should be enough to allow NASA to air the landing video on Monday.

Communication in the long term will be possible thanks to a high sensitivity antenna that will allow direct communication with the Earth. With the sign provided by this antenna, the current direction of the vehicle on the surface of Mars will be determined.

The reason why the first photos sent are not very clear is attributed to the fact that Perseverance’s cameras and high-sensitivity antenna are currently stuck in the body of the vehicle in flight position, and the transparent lens covers on its cameras. After these things are done, much better photos are expected.

Al Chen, a member of the Perseverance team, announced that the vehicle landed on a very rough area about 1.7 km from the center of the intended landing area. Showing the above picture, he stated that the blue areas are acceptable for landing, the yellows indicate the slopes and that they landed the vehicle at a very risky place with a 1.2 degree incline almost completely vertical.

Work will begin after remote software updates are completed

Driving will not happen immediately. Jennifer Trosper said in a statement that the next big step after checking the robustness of the tools is to place the driving and navigation software on the robot. Obviously, this transfer is done very carefully and the crew is willing to spend four days updating and verifying the software before starting any actual rides.

See Also
Perseverance has 'family photo' on missions on Mars

Once driving begins, the focus will be on testing the helicopter the vehicle is carrying. Once an area has been determined, the vehicle must drop the plane on the ground and leave before the helicopter’s flight begins. Trosper is expected to have Perseverance need about 10 Mars days to get the drone ready to fly, then work for 30 days to explore the immediate surroundings.

The vehicle will first examine the surrounding environment

Project Scientist Ken Farley said the areas around the vehicle could be interesting. This is because there is a difference between the location of Perseverance and the sand dunes the team wants to avoid, and this difference aligns with the indicators of different mineral compositions in the data from the orbit. Such geological transitions can be informative about the history of an area, so the team will want to check this out.

Perseverance’s long-term goal is to move towards what appears to be a delta in the northwest, about two kilometers from where it is now. Among the reasons for going to this delta is that it can be the area created by water flows during the rainy periods of Mars and has many opportunities to collect samples. But for now, the main efforts are; includes controlling equipment and operating the antenna.