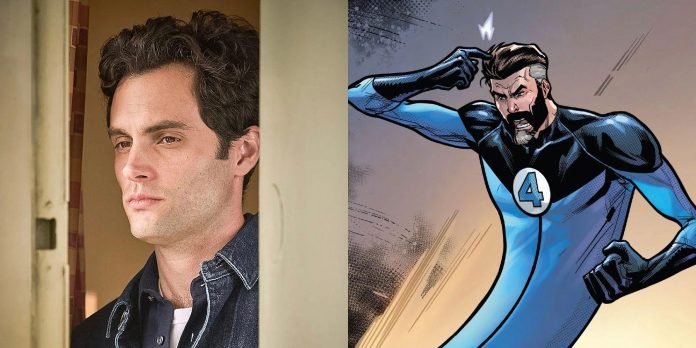 Now that Marvel Studios has confirmed that their own Fantastic Four movie is in development, many have speculated who exactly will play Reed Richards, also known as Mr. Fantastic. There were rumors that Penn Badgley would play the bouncy superhero in the upcoming reboot of the franchise, so a recent fanart came out giving fans a preview of what it might look like if Badgley played the role.

The Rahal Arts Twitter account portrayed Badgley as Richards in light of rumors that the actor could be next in line to play him in The Fantastic Four. Fanart even included certain features in Richards’ character to make Badgley look more authentic like him.

Rahal posted a caption above the fan art, which read: “Penn Badgley as Reed Richards, saw the news today and decided to create a concept. #ReedRichards #FantasticFour #penbadgley #marvelstudios». Badgley not only put on Mr. Fantastic’s clothes, but Rahal also put strands of Bagley Richard’s gray hair on top of his head to create the iconic image of Mr. Fantastic in its entirety. Badgley also wears the same costume that John Krasinski wore in his version of the superhero in Doctor Strange in the Multiverse of Madness.

Fans didn’t welcome Krasinski too warmly as Richards in Doctor Strange in the Multiverse of Madness, so if they plan to remake the character with another actor, Badgley is not the worst option. In recent years, Badgley has attracted a lot of attention with his portrayal of Joe Goldberg in the Netflix hit “You,” in which he embodies a stalker who is actively trying to fight his demons. Choosing him for the role of Reed Richards can really help give the character some twists, make him more human, as Badgley does in the role of Goldberg. His casting could potentially open up some new ideas for the character.

There have been cases when liberty with characters worked in previous Marvel Studios projects. For example, in the first Doctor Strange movie, Baron Mordo, best known as Strange’s mortal enemy in the comics, begins as an ally of the Master of Mystical Arts and even helps him become a sorcerer. Only when he realizes how much the Ancient One has compromised with her values in order to become as powerful as possible does he eventually turn against the practice. Instead of being a villain, Marvel made him an antihero. It worked because his arch was believable, and at the same time smoothly perfected the process of building the world. But taking on freedom isn’t always a good idea, even if the fans don’t notice it.

There have been cases in other superhero media where liberty has failed. In Batman v Superman, Zack Snyder ends up making Batman a killer, and fans know that this is the only rule Batman guarantees above all that he won’t break when fighting crime. He does this because he believes that if he does, he is no better than a man who killed his parents in cold blood, and more importantly, it would be easier to start killing more criminals. Seeing him kill so many criminals, fans didn’t get the feeling that they were looking at Batman as much as at his cheap interpretation. If Marvel Studios chooses Badgley for the role of Richards, it will definitely be freedom, but whether it will be good will depend on how they execute Mr. Fantastic.

“Fantastic Four” is in development.

A link to the Hogwarts Legacy account allows players to make...