Home Entertainment Peacemaker Managed To Get DC And Marvel Studios To Join Forces To... 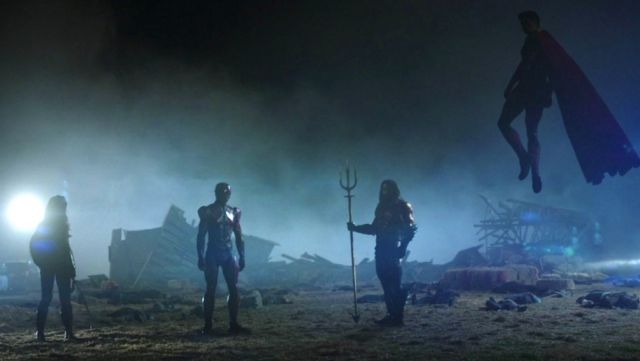 Peacemaker: James Gunn explains how they pulled off one of the final scenes in the final episode of the Peacemaker series that everyone is talking about; spoiler alert.
Peacemaker, the James Gunn series for DC and Warner Bros., reached its explosive finale this past Thursday on HBO Max with a totally unexpected cameo that everyone is talking about. Now, James Gunn himself has recounted how they managed to film that scene taking advantage of Marvel Studios’ production of Guardians of the Galaxy Vol. 3 and in which Gunn was working at the time. We warn of spoilers about the end of Peacemaker from the next paragraph.

The union of DC and Marvel Studios by James Gunn

This has been reported by James Gunn himself in a recent interview with Variety, where the director has detailed how they managed to shoot the final cameo with the Justice League in Peacemaker. And it is that according to Gunn, the possibility of using Jason Momoa (Aquaman) and Ezra Miller (Flash) required the help of Marvel Studios, since at that time the filmmaker and writer was shooting Guardians of the Galaxy Vol. 3.

“Before we filmed the series, we talked to Jason Momoa about it. The idea seemed great. He was pretty much on board from the start, really. So I asked him if he would come to the set and shoot this final scene, and he kindly agreed to do it. Marvel Studios actually filmed the part of Ezra Miller for us while we were shooting Guardians of the Galaxy Vol. 3,” says Gunn.

On the absence of Henry Cavill (Superman) and Gal Gadot (Wonder Woman), Gunn denies that there were plans to include them, since in the end both characters have appeared half shadowed and without a word with the rest, thus avoiding showing the faces of some interpreters that do not correspond to the usual DC. “I actually thought it was going to be just Jason Momoa. Ezra Miller was kind of an extra, you know? I heard that he was interested in doing the cameo.”

On the other hand, neither Ben Affleck’s Batman nor Ray Fisher’s Cyborg appear in said cameo, something Gunn knows nothing about: “I think there are reasons for it, but actually I’m not sure I can say what they are.” those reasons. Perhaps they have to do with the future”, concludes the filmmaker. Although the absence of both may be due to Affleck’s departure from the role of Batman (with his expected dismissal from him in The Flash) and Warner Bros.’s veto of Fisher after his controversy with Joss Whedon and the production company itself.