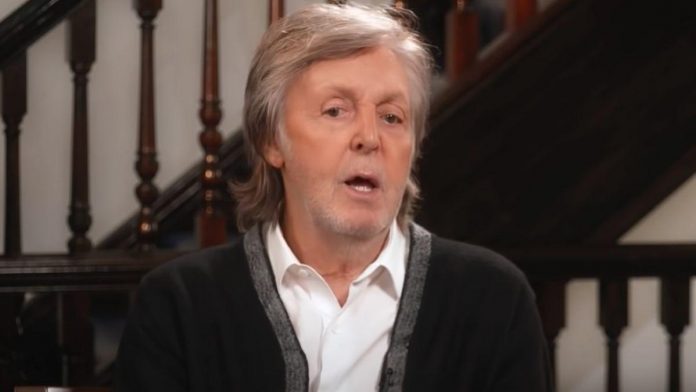 Among the many legal problems associated with his conflict with his ex-wife Amber Heard, Johnny Depp has become a public figure, causing a mixed reaction. Some still disagree with him because of the accusations made against him by his ex-wife, while others continue to support him or pay tribute to him. This weekend, during his performance at Glastonbury, music icon Paul McCartney clearly did not express support for Depp, although he showed old footage of the star from one of his music videos. Although the clip did not elicit an enthusiastic response from fans, they were apparently delighted with the touching moment involving the late John Lennon.

Last Saturday, Paul McCartney headlined the Glastonbury Festival, where he performed some of his greatest hits, according to Deadline. Among the songs he performed was “My Valentine” from his 2012 album “Kisses on the Bottom”. While the Grammy winner was performing the song on the piano, shots from the music video were shown, which depicted Johnny Depp and Natalie Portman. This is not the first time the singer has used the footage recently, as they were used during his US tour, which happened in the midst of the actor’s case against Amber Heard.

Some fans on social media were not very happy with the footage of the music video shown. For example, one person took to Twitter to express his lifelong love for the former Beatle, as well as to complain that he is a “Depp supporter.” However, almost everyone seemed to agree with the tribute he included to John Lennon. Thanks to some digital magic, an 80-year-old man and Lennon (through the screen) sang “I Have a Feeling.” According to Deadline, this performance caused the loudest applause, and those who took it from the Internet liked it too. One user seemed impressed by the fact that the musician managed to find a way to surpass Dave Grohl and Bruce Springsteen, who performed with him on stage.

Paul McCartney has paid tribute to his former bandmate several times over the years. In some cases, he shared sweet memories of how they hung out together. He also honored him at concerts with digital performances similar to the one shown at Glastonbury. In general, you should like the way John Lennon’s friends and family preserve the memory of him.

Johnny Depp’s legacy, on the other hand, may be the subject of controversy in the future. Just a few weeks ago, the Oscar nominee won after a jury verdict ruled that he would receive a collective $15 million in compensation and penalties. Responding to the ruling, Depp said he “felt calm” even though he wasn’t done in the courtroom yet. The actor is going to challenge another case related to assault charges filed by a member of the crew in his 2018 film “City of Lies.”

Meanwhile, the artist is still finding work, and one of the new projects he has planned is based on music. The actor is teaming up with his friend, guitarist Jeff Beck, to record a new album. The “Pirates of the Caribbean” star recently performed in a show with Beck and attracted attention. Even former actress Kate Moss came to his London show after defending him in court.

So it seems that Johnny Depp’s presence on the music scene will grow from here. That being said, you have to wonder if this could mean that another collaboration with Paul McCartney could be in the cards. That remains to be seen, but until that happens, I’d say there’s a chance McCartney will continue to show footage from his past music video paying homage to John Lennon at concerts.