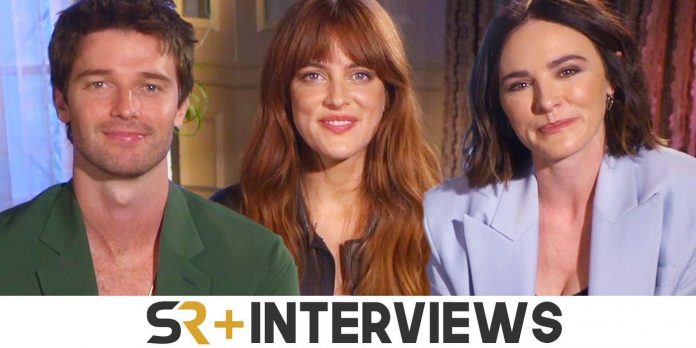 “Terminal List,” the newest Prime Video thriller series, begins with the devastation experienced by its hero James Rees (Chris Pratt, “Jurassic World”) after losing his Navy Seal team on a mission that went horribly wrong. When the losses get even closer to home, he has no choice but to go on a revenge mission and destroy the people on his list — hence the chilling name of the show.

Based on the Jack Carr series of novels, The End List has a large and talented cast, each of whom plays characters that are integral to Rhys’ plot or his emotional well-being. Riley Keough (Zola) plays Lauren Reese, James’ wife and a rock who helps him through difficult times until tragedy takes her away from him. Patrick Schwarzenegger (“The Ladder”) plays Donnie Mitchell, the youngest and most energetic member of Rhys’ team. Tyner Rushing (“Very Strange Things”) plays Liz Riley, one of the few people Rhys can trust.

Screen Rant talked to Schwarzenegger, Kio and Rushing about how they prepared for their individual roles and what aspects of their training were the most unexpected.

Screen Rant: Each role requires a new level of research and training. What is the most unique training or research you’ve done for this series?

Patrick Schwarzenegger: I think that each of us had a unique and different training and preparation for this project. But I think I’ve been very lucky and fortunate to work with some of the real Navy seals, both on and off screen. We started working a few weeks before our first day of filming just on tactical training, practicing movements and body language, and all these different things to help me put myself in the place of a navy seal.

I will always remember those days. They were very funny and I learned a lot. It’s always a really cool part of the job: preparation, research, and what you can do to put yourself in someone else’s shoes.

Riley Keough: Definitely. As for me, I’ve been talking to the wives of Navy seals. It was kind of my preparation, I was just trying to understand as much as possible what kind of life they have, and what kind of relationships they have with their husbands and children. And how difficult it is to have a husband who leaves and you don’t know if he will come back. It remains to hear the details.

They were so honest and willing to share details about how these conversations would happen to their husbands—or not happen. Or conversations with their children, and how they will prepare if something happens. Hearing from these women has been the most rewarding thing, because I’m trying to portray that kind of lifestyle.

Tyner Rushing: Max Adams and Jared Shaw, two producers of the show, former Special Forces, introduced me to a wonderful guy [named] Colonel Kyle Moore. He is an active pilot, a former military man. And he suggested that I take a piloting lesson, or a flight school, or take courses. I thought it was going to be a private meeting in class. I call there, and they’re like: “Actually, we could host you today.” And I’m like, “Wait, you mean flying through the air?” I call Kyle back and say, “Should I fly? Actually fly an airplane?” And he’s like, “Yeah, you should take a plane.” And I’m like, “Oh, my God, I’m going on a plane today!”

I did it. I mean, I almost had a panic attack in the air. When I came down, I was so worked up. I thought: “Maybe I’ll get a pilot’s license. Maybe this could be my new thing!” And later I got a migraine and I thought: “I’m too sensitive. I don’t know if it’s for me. My nervous system is too sensitive.” But I think this kind of preparation was the most exciting and unusual preparation I’ve ever done.

Tyner, I think I just talked to you for “Under the Banner of Heaven,” and you’ve done so much in a month. So much has happened to you. Is Kate Bush stuck in your head as much as the rest of the world?

Tyner Rushing: I actually played a lot of “Hounds of Love”. It’s one of my favorite songs of hers, and I just love that “Very Strange Things” brought her to the show. So cool.

The terminal list follows James Rice (Chris Pratt) after his entire Navy Seal platoon is ambushed during a secret mission. Rhys returns home to his family with conflicting memories of the event and questions about his guilt. When new evidence emerges, Rhys discovers that dark forces are working against him, endangering not only his life, but also the lives of those he loves.

Check out our interviews with the stars of the TV series “Terminal List” Chris Pratt and Taylor Kitsch, Lamonica Garrett and Jeanne Tripplehorn, as well as Constance Wu and J.D. Pardo.