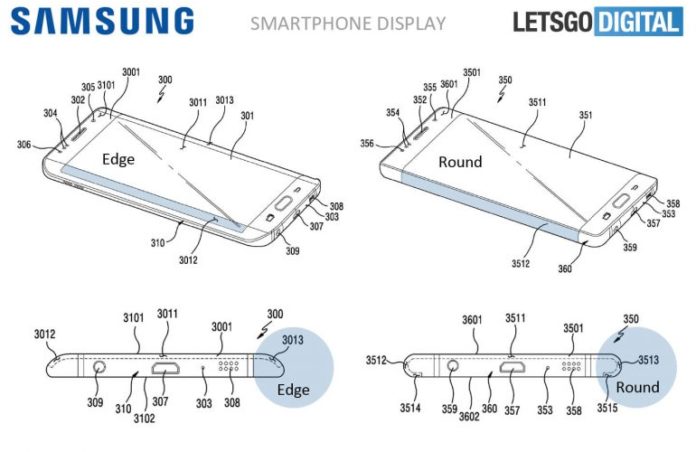 A new patent by Samsung has surfaced. This patent, which is thought to belong to the Galaxy Note20, reveals that the phone will have a waterfall-style screen. In addition, Samsung will remove the physical keys on the phone from the holes it will open on this screen.

South Korean technology giant Samsung introduced its new flagship “Galaxy S20” family with an event last night. Technology enthusiasts haven’t met this phone yet, but as of today, it looks like we’re going to start talking about another flagship Galaxy Note20 that Samsung will be introducing later. Because a new screen patent that Samsung has received is thought to belong to the Galaxy Note20.

Samsung is a manufacturer that likes to use curved screens on smartphones it releases. In fact, Samsung’s curved screens are often praised by consumers, and Samsung, who is aware of this situation, does not give up this design. The screen patent, which has now emerged, reveals that Samsung may produce phones with more curved screens in the future.

Here is the patent that Samsung has received
As can be seen in the patented image, Samsung’s new patent shows a phone with a 90 degree incline of the screen glass. These “waterfall” designs, which we have seen in various smartphone manufacturers for a while, seem to be used by Samsung in the future.

Samsung will not give up physical keys, although it completely covers the sides of the device with the screen. According to the patent images, the holes in the curved areas of the screen will continue to contain the physical keys.

Another view of the said patent is as follows
This image in Samsung’s new patent shows that the new phone the company is working on will have 3 front cameras. Putting two of them side by side, Samsung has placed its third camera hole somewhat further away. The image in question also clearly shows the USB Type-C port on the bottom of the phone.

The Samsung Galaxy Note10 series does not have a 3.5 mm headphone jack. However, this patent, which is thought to belong to the Galaxy Note20 series, shows that there is a 3.5 mm headphone jack (309) at the bottom of the phone. There is also no S Pen entry at the bottom of the patent in question. However, at this point, it should be noted that this is a screen patent, not a phone patent. So Samsung may have hidden the S Pen port because it didn’t want to reveal the Galaxy Note20’s design with this patent.