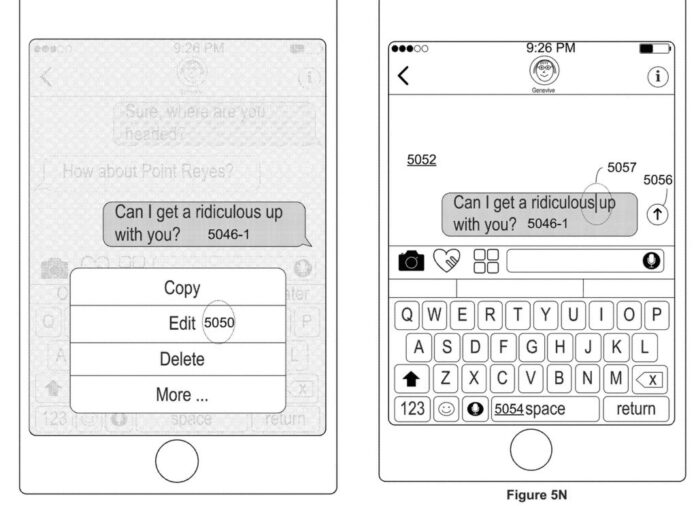 A new patent application made by Apple in the US shows that the tech giant is working on a feature that allows iPhone users to edit messages after sending.

Apple’s patent application does not specify whether the correction of the sent message is for SMSs or iMessage. However, when we think of the general structure of SMS messages and the instant message feature of iMessage, I think we will not be wrong if we say that the feature can only be used in iMessage.

Apple’s patent is said to have numerous disadvantages and limitations of existing messaging apps. The technology giant lists the disadvantages of not being able to edit messages and not being sure whether everyone is seeing all messages in the same order.

In the patent application filed, Apple states that the existing messaging application can be developed in a few basic ways. In the patent, “Electronic devices with advanced methods and interfaces are needed to choose an effect effect for a message. These methods and interfaces can complete or replace traditional methods to select the effect effect for a message. ”

Message editing feature expected to cover iMessage only
The editing feature that Apple has blown over can easily be seen in the drawings in the patent application. A drop-down menu appears below a message sent in the two iPhone messaging app drawings included in the patent document. In addition to copying and deleting the message, there is an editing option in the menu that opens. When the editing option is selected, the keyboard opens and the user can edit the message.

Messaging services like Slack have been allowing users to edit messages they’ve sent within the app for a while. Apple’s patent application shows that the company continues to work to offer this feature to iPhone users in the long term.

N26 in Brazil: learn how to enter the digital bank’s queue