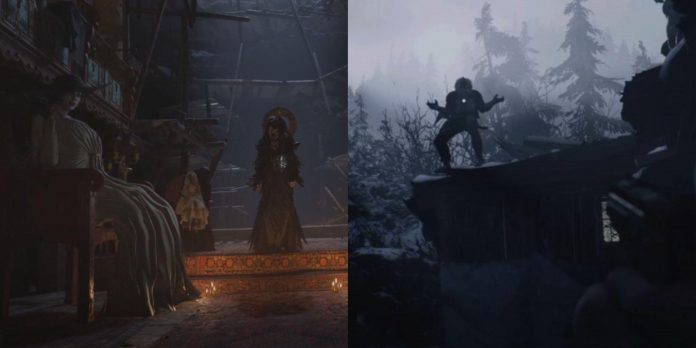 Getting lost in Resident Evil Village is easiest at the very beginning. Since the players don’t know the layout of the village yet, it’s easy to get lost and turn off. The overall story is linear, but at first it doesn’t exactly seem that way.

Gamers who want to go through the story of Resident Evil Village should start here. This guide is intended solely for going through the main plot; Finalizers who are looking for all the secrets and collectibles will want to explore each area a bit.

Go upstairs and put the baby in the crib. Then go back downstairs and into the kitchen. Approach Mia to watch the cut scene.

At the end of the video, the players will be next to a ringing mobile phone. Take it and enter two more cut scenes.

Don’t get hung up on the next part. There is a snow path. Just walk through it. Players turn around, looking for exits on the left or right, just trudge straight forward. There’s a barbed wire fence, dive under it and keep going.

After that, the path will become even clearer, follow the dead birds.

Cross the bridge and a few legs, then enter the cabin on the right.

Go through the cabin to find the stairs leading down. Go through the basement and inspect the large wardrobe with a bloodstain at the bottom. Opening it will cause a loud noise from the top floor.

Go back upstairs and crawl under the chest of drawers at the top of the stairs.

Open a new hole in the wall that didn’t exist before and use it to get out of the cabin. Once again, Ethan will be led down a long path, and all he has to do is go ahead.

Descending the dirt ramp, Ethan will find a gun at the entrance to the village. Although there is a lot to explore, the right place for the plot to develop is almost at the opposite end of the village from here. Follow the dirt road and enter the shack with a lighted torch in front.

Go through the shack and find the curtain at the back. Open it and enter the cut scene.

Interact with the body hunched against the stone wall to see another video.

Kill the zombie and enter the hole from which it appeared, back to the shack.

Find some bolt cutters on the shelf, go back and cut the lock on the gate.

Right in front of this place there is an obvious open door with a light bulb right above the entrance. Go inside, go up, and then come back down. This triggers a zombie attack.

Kill the zombies and go to the door with a medium-sized hole at the top.

There will be a scream and another wave of zombies. To escape, look for red bloodstains that lead to the stairs.

Go up the stairs and go through this house. Find a ladder through a homemade hole and go down.

Exit through the stone hole. It’s easy to get lost from here. Go straight and past the house in front of Ethan (the path on the right).

Running out of the room, look to the left and find the door to the side of the hut. Enter, close the door behind Ethan to keep out more zombies, and climb the yellow stairs.

This brings Ethan to the roof of the house. Now jump down and go to the track with the red gate blocking the way forward. There will be an explosive barrel in front of him.

Although there is a faster way to this road, Ethan has to go this way to summon all the zombies in the area. He must kill them all and survive the Lycan ambush. There is an achievement for those who can kill this mini-boss now rather than wait later. Aggressive players will want to play offense, while new players will most likely just want to try to survive the onslaught by running, hiding and dodging punches.

After waiting for an attack or killing all enemies, the cut scene will start. The previously closed door will now finally be opened. Go through and start another NPC cut scene. At this point, another part of the village opens. Walk past this central courtyard, through the field and find a bluish shack on the right side. Entering it will trigger a cut scene.

After he plays, exit through the window, then immediately turn left, jumping on a few boxes to climb over the wall.

Hug the left side and follow the dirt road to the big gate. By opening it, players will get another cut scene.

After the cut scene, straight through and through the red double doors for another cut scene.

Wait a bit in this room, then follow the NPC down a short corridor. At the end, two more consecutive cut scenes will start.

Go straight past the fireplace and enter the next door on the left. Inside, find the truck key in the green cabinet. Interact with them to find the screwdriver located inside the keychain. Repeat Ethan’s steps to get back to the red truck. Interact with the ignition to continue.

After the video, go up twice. This will trigger a cut scene.

The Roald Dahl stories are now entirely in Netflix’s hands!

The release date of the 5th season of “Cobra Kai” has...