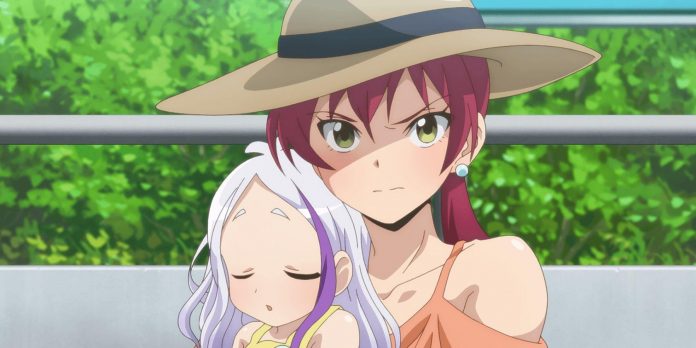 Below are spoilers for the first episode of the second season of the Part-time Devil series titled “The Devil and the Hero become Parents in an Incomprehensible Way”, which is currently being broadcast on Crunchyroll.

The devil works part-time! The second season continued with the drama caused by Alas Ramus. This time focusing a little more on how the child has affected the daily lives of others. Viewers were able to see how Amy and Mao are trying to decide which part of the parental role they are ready to take on, and how they are evaluated by their peers for this. In keeping with the nature of the show, there was persecution, exploration of society, enmity between demons and humans, but unusually no real hint of magic. This episode also lacked the trademark humor that permeated the first season.

The devil works part-time! It follows the antics of Satan himself as he adapts to worldly life in an all-too-human Japan. He fled there after failing to conquer his homeworld of Ente Isla, and was chased by the hero who defeated him, Amy. Along the way, he gathered a fair part of his generals and turned more than one of his enemies to a preliminary truce and, perhaps, even to trust. The second season began with the introduction of Alas Ramus, a creature whose allegiance is currently unknown.

The biggest problem with this episode was the lack of anything that would really move the plot forward. Viewers could catch a glimpse of the Devil’s Castle adjusting to life with a toddler, as this was the main theme of the episode, but these conflicts didn’t actually play out on screen. The closest was a brief montage of frozen images depicting fragments of their time together. In general, the adaptation was simply reflected in Ashia’s pale expression and some minor complaints of Bel.

The only conflict that really happened in this episode occurred when Mao and Chi’s boss took them aside to encourage them to stop spending time together just for show. Although this could have been an interesting plot element, perhaps creating tension when she tried to avoid him, and vice versa, Mao immediately refuted this by simply asking her to continue helping him.

The pace of this particular episode also didn’t match the first season. By the end of the second episode, Amy and Mao, along with Alas Ramus, are heading to an amusement park. Compare this to the first season, when all the characters go to the water park.

They find out about it, plan to go and leave in one episode. This season they just plan to go, implying that the park will be mostly or completely in the next episode. While the slower pace isn’t necessarily a bad thing, the previous complaint about the plot makes it clear that they didn’t fill the remaining time with anything meaningful.

There were still a few jokes in the second episode, mostly at Urashihara’s expense, of course. Overall, however, this episode was a bit more focused on real life than jokes. There was nothing frivolous in the communication between the manager, Mao and Chi, as well as in the conversation between Chi and Ashiya about diapers.

Towards the end, there were jokes where Chi made fun of Ashiya for stalking him, and then the whole team made fun of Amy for changing her clothes. However, this last moment seemed friendly rather than funny, compared to the sharp humor that is usually found between different factions. This friendly tone can be traced in other moments, for example, when Chi and Suzano communicate with Alas Ramus together.

The only thing this episode can do well is tweak the third episode. A lot of time was spent on creating the world, which, Alas, had an impact on the main cast, and on creating this park, in which the three of them gather together. Let’s hope that the structure outlined in the second episode leads to a very strong third episode, otherwise this episode would be something of a disappointment. Of course, this episode was still fun to watch, and the characters’ reactions to their various awkward situations were still well-crafted and consistent with their established personalities.

This may look like a filler episode or an intermediate episode, but this does not mean that it will still not be important for the overall plot of the show. Although no new concepts were introduced in this episode, it cemented some new elements for this season, Sauriel and Bel in their new roles and, of course, Alas Ramus and her influence. In general, this episode is worth watching, perhaps not on its own laurels, but simply because it will clearly serve to create and support the third episode, which promises to be full of everything that fans like about this beloved anime.

Halo Infinite: They compare how it runs on Xbox Series X,...