Home Entertainment Parks and Recreation: 10 Quotes that Prove Jennifer Barkley is an Underrated... 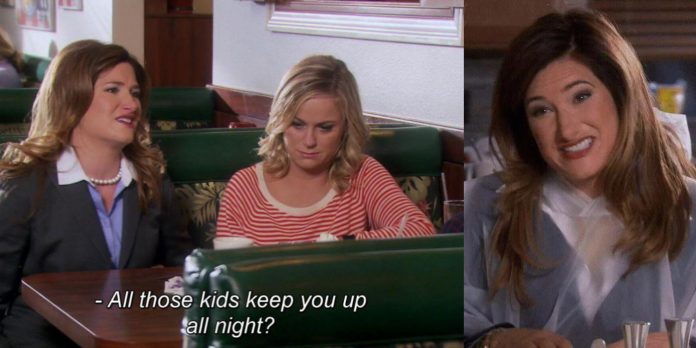 Earlier this year, Marvel announced that Kathryn Hahn was the face of a new series, Agatha: House of Harkness. The series will be released on Disney+ and is currently in pre-production.

Hahn is most known for her roles in Step Brothers, Bad Moms, Transparent, and The Shrink Next Door. However, it was her side character, Jennifer Barkley, that had Parks and Recreation fans talking. Her one-liners and refreshingly honest responses made her a beloved character with some of the best quotes from the series.

“Then Dream Bigger. Look, You Love This Town. It’s Being Run By Monsters And Morons? Get A Better Job! Rise Above Their Heads.”

In ‘Second Chunce,’ Leslie was devastated when she was recalled from her position on the city council. She talked to Jennifer Barkley about her options, but instead of agreeing with Leslie, Jennifer thought she was trying for nothing.

RELATED: 10 Best Parks And Rec Characters, According To Ranker

Jennifer gave it to Leslie straight and told her to “dream bigger.” Why was she trying so hard for a town and its people who didn’t respect her? Jennifer was right — Leslie needed to move on and dream bigger. Although Jennifer and Leslie didn’t always see eye-to-eye, Jennifer was one of the best characters on Parks and Recreation for her ability to be both supportive and demanding.

“If You Love Chess, Which I Do, But You Don’t Have Anybody To Play Against, Which I Don’t, Then Sometimes, You Just Gotta Play Yourself.”

In ‘Campaign Shake-Up,’ Leslie and Ben met Bobby Newport’s new campaign manager, Jennifer Barkley. At first, Jennifer was incredibly nice and giving, but when it came time for their first champagne event, Jennifer buried Leslie and Ben with her promises to the town.

When Leslie and Jennifer got together to talk about how the event went, Jennifer proved why she was so good at her job. She was one of the wealthier characters on Parks and Rec. because Newport paid her over $200,000 to work her magic. As a lover of Chess, she knew exactly how to play Leslie and how Leslie could play her. It was one of her smarter quotes.

“I’m Gonna Go Spend My Time Doing Exactly What I Want To Do Because I Don’t Have Children.”

Ben and Leslie were one of the best couples on Parks and Recreation because of their chemistry and extreme support of one another’s career goals. Because of her energy and attention to detail, fans knew Leslie would be a great mother if she ever wanted to have children.

However, it was a bit of a shock when Leslie and Ben found out they were having triplets. Jennifer became closer with Leslie and Ben as the series went on and wasn’t afraid to show her disdain for kids – even their children. This was one of her funnier quotes for fans who felt similarly.

“Ugh, Your Life Is Gross. My Life Is Amazing.”

Speaking of children, when Jennifer went to Leslie and Ben’s house to discuss Ben potentially running for congress, she was taken aback by the loud noises she heard coming from their home.

When Leslie and Ben told her the screams she heard were children, Jennifer was disgusted and called their life “gross” before saying her life was “amazing.” Her aggressive nature and honesty were harsh but refreshing (not to mention hilarious to watch).

“We’re Talking About The House Of Representatives Ben, You’re Overqualified.”

Even though Ron and Leslie were one of the best on-screen duos, Leslie and Ben weren’t far behind. With both of them working for the government, they were a powerful couple and duo who were destined for greater things outside of Pawnee.

RELATED: 10 Reasons Why Leslie And Ron Are The Best On-Screen Duo

So when Jennifer asked Ben if he’d consider running for congress, he was taken aback because they both assumed she’d ask Leslie to run. Hilariously, when Ben questioned Jennifer’s request, she reminded him that he was overqualified compared to the other congressmen. When it came to Washington politics, Jennifer loved throwing everyone under the bus.

“This Is Chaos Magic, Leslie. And That Makes You Scarlett Witch.”

In a funny shoutout to Hahn’s Marvel character Agatha Harkness, she repeated one of Agatha’s own quotes but replaced the name Wanda with Leslie.

Leslie and Jennifer were never close but they did respect each other. There even came a time when Ben hired an hour of Jennifer’s time to consult with Leslie about her next move. As much as they butted heads, they also pushed each other to be better versions of themselves — especially Leslie, who was inspired by Jennifer’s powerful demeanor.

“The Air In This Town Is Killing My Brain Cells.”

Kathryn Hahn was one of Parks and Rec.’s best guest stars. She demanded attention and commanded the room whenever she was on the screen. In one funny scene, Jennifer asked Leslie and Ben what their next political move was. After Leslie told her, Jennifer was surprised by what a good idea it was and didn’t know how to follow it.

She was bothered that she didn’t think of the idea already and blamed her slow-moving mind on Pawnee killing her brain cells. Considering how much she hated Pawnee, this was a hilarious dig at the city.

“I’m Calling On Leslie Knope To Cancel All Of Her Campagne Events Out Of Respect For The Newport Family. Anything Else Would Be A Classless Move On Par With Spray Painting Nipples On The Lincoln Memorial.”

As was the case with the ridiculous things said at Pawnee’s public forums, Jennifer said equally as wild things in campaign interviews. With Leslie being her rival, she had no qualms about lying about Leslie or dragging her to the ground for Bobby Newport’s gain.

In an interview with Perd, Jennifer begged Leslie to end her campaign against Newport because it was “on par with spray-painting nipples on the Lincoln Memorial.” This quote was so outlandish that it was impossible to ignore.

When Jennifer convinced Ben to move to Washington DC for a short time to work on another campaign, he brought April along as his assistant. Ben worked closely with Jennifer and learned a lot from her.

In the end, the two succeeded and told their team what a great job they did. Ben told April that she could head back to Pawnee early if she wanted to since her job was done. In response, April took a sip of champagne, dropped the glass on the ground, and ran out the door. Jennifer loved April’s dramatic exit and screamed, “Gone but never forgotten!” before asking “Who was that?”

Leslie Knope was one of the best government employees but there came a time when she had to dream bigger — and Jennifer was a huge source of inspiration for her.