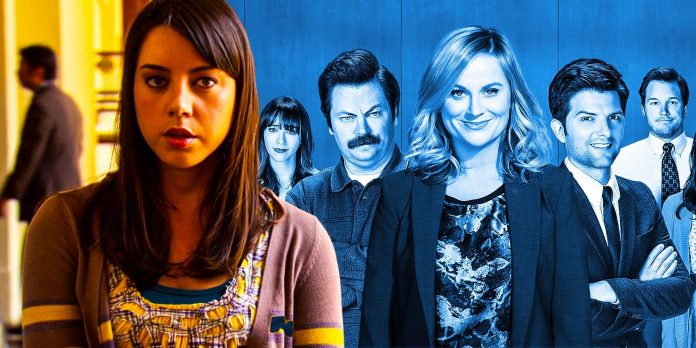 The Pawnee Parks Department team in the Parks and Recreation section was formed from very different personalities, and among those who stood out the most was April Ludgate (Aubrey Plaza), who never showed interest or enthusiasm for working at City Hall, and the deleted scene explains how she got there. Created by Greg Daniels and Michael Schur, the Parks and Recreation series is now considered one of the best TV shows of the decade, but the path to success was not easy, and its first season was so different that it seems disconnected from the rest of the show. but, fortunately, the screenwriters found the right tone for it, and subsequent seasons were successful with critics and viewers.

“Parks and Recreation” took viewers to the fictional city of Pawnee, Indiana, to meet with the Parks Department team led by the always optimistic and cheerful Leslie Knope (Amy Poehler). Thanks to her, viewers got to know her colleagues and closest friends, sharing the spotlight with them, and many of them became fan favorites, and more and more attention was paid to their individual storylines in the series, as happened with Ron Swanson (Nick Offerman), Andy Dwyer (Chris Pratt) and April Ludgate. The latter was the youngest member of the crew, and in the first season of Parks and Recreation, she was introduced as an intern of the Parks Department, and viewers saw her growing in all areas of her life, always with the help and support of Leslie and the others.

Related: Parks and Recreation: How Old are April and Andy at the Beginning and End

April was apathetic and had an unflappable personality that, along with her sarcastic personality, captivated the audience, and although she matured a lot at Parks & Rec (even became a mother of two children with her husband Andy), she never lost this dry character. sense of humor. Although April had worked for the Parks Department for many years, she didn’t show much interest in it, which raised the question of why she signed up as an intern for the Parks Department in the first place, and the deleted scene from the first season gives the answer — and it suits her character very well.

In the pilot episode “Parks and Recreation”, Leslie and company were introduced, including April, who was simply introduced as an intern, but no more information was given about why she chose the Parks Department. A deleted scene from the very first episode of Parks and Recreation shows that she didn’t actually choose the Parks Department, as she missed the day of registration for the intern’s places because her sister forgot to wake her up on time, so she was randomly assigned to the Parks Department. Parks and Recreation Department (and she didn’t even know the full name of the department, and wasn’t interested in it). Although April may not have enjoyed her time at City Hall at first, it was the best thing that could have happened to her, as she not only made lifelong friends, but also met Andy while working there.

Although working for the Parks Department wasn’t what April would have wanted, it gave her the opportunity to try out different professions. Ron hired April as an assistant mainly because they both hated people and she kept them away from him, and later she became Chris Trager’s (Rob Lowe) assistant, Ben Wyatt’s (Adam Scott) assistant during the congressional campaign, deputy director of animal Control, and finally With Leslie’s help, she found her passion and an ideal job at the American Services Foundation. A deleted scene from the pilot episode of the TV series Parks and Recreation, showing how April ended up there, would explain a lot in her backstory, and also add even more to it, since this is what perfectly matches her mood and personality, and the scene is so short that it wouldn’t even spoil the pace of the episode..

BLACKPINK: Rosé Gives Her Sister The Best Gift Ever