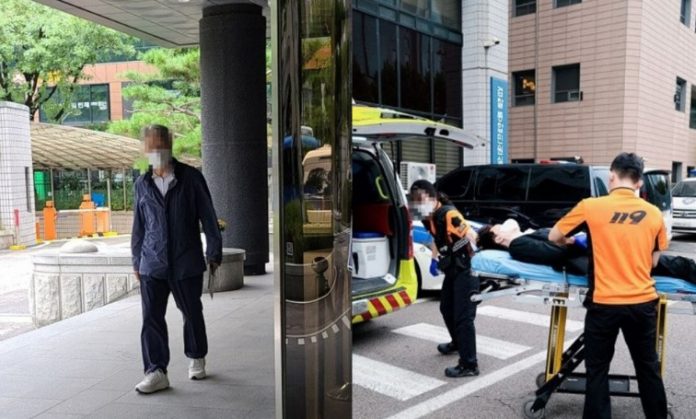 On October 4, Park Soo-hong was attacked by his own father while he was attending a cross-examination at the Prosecutor’s Office of the Western District in Seoul in a case of embezzlement involving his older brother.

It was reported that Park Soo Hong was even taken to the hospital after his father attacked him during cross-examination at the prosecutor’s office. In addition to the news, there were reports of an incident in which witnesses stated that Park Soo-hong’s father said, “I wish I had a gun” during the prosecutor’s investigation after the attack and “I would have really stabbed.” him, if I had a gun.”

Park Soo-hong’s daughter-in-law and his father are said to have gone to a nearby restaurant to have lunch after the attack. During the meal, they did not seem to show any emotional feelings or remorse about the situation.

SBS Entertainment News reporters spoke with Park Soo-hong’s father, who returned to the prosecutor’s office after lunch. Park Soo hong’s father spoke up: “What are you interested in?” and added: “I think I should talk to the press now, too.”

Park Soo-hong’s father admitted that he attacked his son at the prosecutor’s office, and explained: “He should properly greet his parent, whom he has not seen for a year and a half. That’s why I kicked him in the shin once. His brother was sitting there in prison clothes, and he has to say, “How are you?” or “I’m sorry” when he sees his parent. We supported him all this time, washing, cooking for him and cleaning for him. I’m not some kind of dog or pig to be treated like this. ”

When he was asked: “Why should Park Soo Hong be sorry?” his father replied, “He called his father, who is over 80, to such a place to investigate; he should at least apologize.” The reporter continued, “Isn’t it because Park Soo Hong’s older brother was arrested for embezzlement and you were called as a witness?” In response, his father said, “It’s because he exposed his brother as a thief through the media.”

The reporter asked: “On the other hand, your eldest son has property worth tens of billions of won (millions of dollars). What about this?” Park Soo Hong’s father explained: “This is because my eldest son is an expert in real estate (investment). He brought me to Magok-don when it was a desolate land and asked me, “How is this place?” Then my eldest son invested money there, now there are 8 stores in it (in the building).”