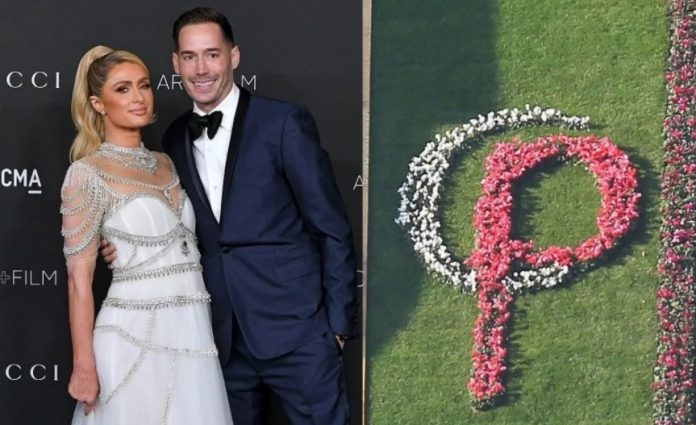 The hotel heiress and venture capitalist became husband and wife Thursday night during a lavish ceremony in Holmby Hills, California. The couple said “Yes, I do” to each other at their late grandfather Barron Hilton‘s Bel-Air estate on Thursday, November 11.

The celebration, which will be a three-night event, began with a reception at the farm. It will continue with a carnival on the Santa Monica Pier this Friday and a gala evening on Saturday.

The 40-year-old hotel heiress Paris Hilton had several outfit changes throughout her special day on Thursday, as she originally disclosed it herself during her appearance on “The Tonight Show.”

“I love changes of clothes,” she said, adding that even then fiancé, also 40 years old, she would wear only one change since “he is not as demanding as I am.”

The socialite got her first look at her custom Oscar de la Renta wedding dress when she took to her Instagram account on Thursday night, right after the ceremony.

With a glamorous snapshot, Paris debuted showing only the top of her dress along with a glimpse of her stunning engagement ring looking at the camera as she veiled her face.

Hours later, Vogue magazine exclusively published on its social networks a photograph of the full dress that Hilton wore on her special day, showing a rather elegant and sophisticated style.

It was also learned that singer Kim Petras was in charge of singing “l Can’t Help Falling In Love” while the socialite walked down the aisle. It was also revealed that later at the reception, Demi Lovato did a performance during dinner.

Some of the guests who were seen arriving at the party were celebrities such as Emma Roberts, Bebe Rexha, Ashley Benson, Paula Abdul, Rachel Zoe and of course, her long-time friend Kim Kardashian could not be missing.

Their opulent nuptials included a huge wooden dance floor built outside, as well as flower arrangements in the shape of the bride and groom’s initials in pink and white.

Paris’s parents Kathy and Rick Hilton arrived at the evening ceremony just before sunset in a black chauffeured vehicle that was parked near the entrance to the Bel-Air mansion.

The newlyweds, confirmed their relationship for the first time in April 2020, got engaged in February. The venture capitalist asked the question on a private island after dating Paris for a year. His proposal was accompanied by a spectacular emerald cut diamond ring designed by Jean Dousset.

The wedding festivities will be captured on camera for the reality star’s new 13-part docuseries, “Paris in Love,” which premiered Thursday on Peacock. So fans of the heiress will be able to enjoy every detail of the Hilton wedding from the comfort of their homes very soon.