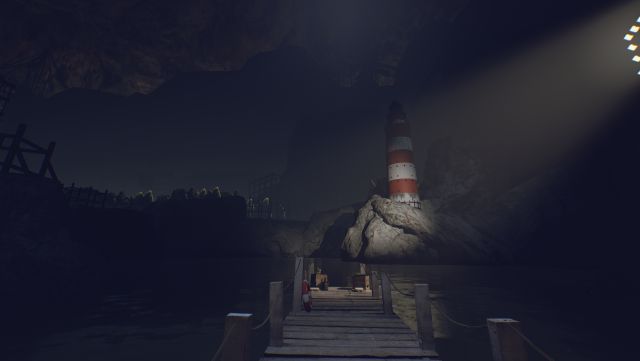 We analyze Paradise Lost, a narrative adventure set in an alternate future after World War II. A lost bunker.

Paradise Lost catches you at the first glance. Their environments, typical of the visual line used in the late 40s, keep that aura of mystery that we have seen so much in works of fiction. The Poles of PolyAmorous Games offer their particular vision on the alternative history line after World War II. What would have happened if the armed conflict had lasted 20 more years?

The atomic bombings in Hiroshima and Nagasaki in mid-1945 remained a mere anecdote. What the Americans did not know is that the Adolf Hitler regime was preparing for its own nuclear offensive. 15 years later, the political horizon has little to do with what happened in real life. The conflict escalated to such an extent that the German army pushed the damn red button. A shower of missiles hit the heart of Europe: nothing could be saved.

Under this premise, Lost Paradise is born, a walking simulator in which we will embody a boy of just 12 years of age. Szymon, the he named after him, wanders the remains of the Old World until he finds access to an old Nazi bunker. At that moment the adventure begins

In search of a memory

The nature of the game marks its development. We are facing a narrative adventure that is sustained by two indivisible elements: the force of the context and the script. One would be nothing without the other, and vice versa. There is absolutely nothing else. No combat, no overly elaborate exploration… nothing. We are alone in a bunker that contains more questions than answers.

The linearity of progress is subject to the thrust of the argument. About us? What exactly are we doing here? What happened on stage? Most of the logical questions during the initial half hour manage to find an answer through documents and audio inputs. Szymon, sparing in words, will discover the history of this refuge by reading the heritage of others.

These texts usually have a certain coherence between them within the same level. For example, one of the chapters stars a luxurious mansion where the highest society of the regime lived, where you manage to understand the motivations of those who came before you. However, some secondary stories have their own development throughout the chapters.

Grey’s Anatomy: The departure of this character was the worst in...

The Last of Us: They reveal the first images of the...