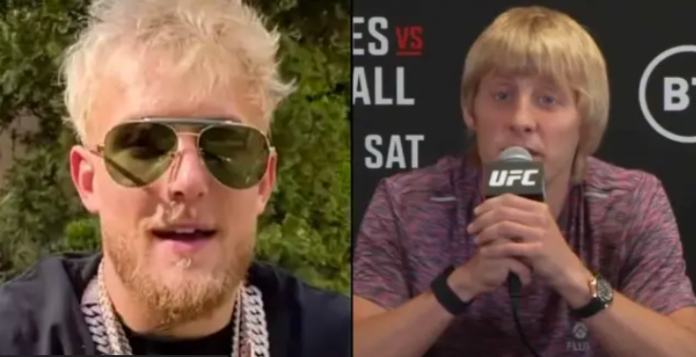 UFC star Paddy “Bad” Pimblett has answered Jake Paul’s $1 million challenge for sparring before the fight, and he is ready to face a “Difficult Child” in the near future.

Jake Paul has been waging a war of words with a number of fighters over the past few years, with the YouTuber-turned-boxer constantly arranging fights and other challenges.

Since he kind of distracted himself from Tommy Fury by sending offers to fight three different fighters, he somewhat returned to targeting mixed martial arts fighters. In fact, UFC star Paddy Pimblett found himself in Jake’s sights as a “Difficult Kid” offered him the opportunity to spar before his next fight after he claimed the YouTuber’s fights were “fixed.”

Despite the fact that a significant amount of bragging rights were at stake, Jake decided to sweeten the deal a little by offering Pimblett $1 million to make it happen. And, well, Scouser is interested.

Pimblett spoke to TMZ Sports shortly after Jake made a lucrative sparring offer and officially declared his interest. However, he wanted Jake to fly to Las Vegas to make it happen, not to Puerto Rico.

“Of course, but I have a contract with the UFC, and he said it knowing full well that I will fight next week,” Pimblet said, confirming his interest. “Come to PI next week. Come to PI next week and bring $1 million in a bag, and I’ll spar with you. Let’s do it, I’ve been in Vegas since Thursday.”

Buddy confirmed that in the days leading up to the fight, he will be underweight, but he can stay after and be closer to Jake’s weight, which will make the fight more equal.

As it stands, Jake has not yet responded to Pimblett’s proposal, so we’ll have to wait and see if it comes to fruition. But this is certainly something that fans are interested in.