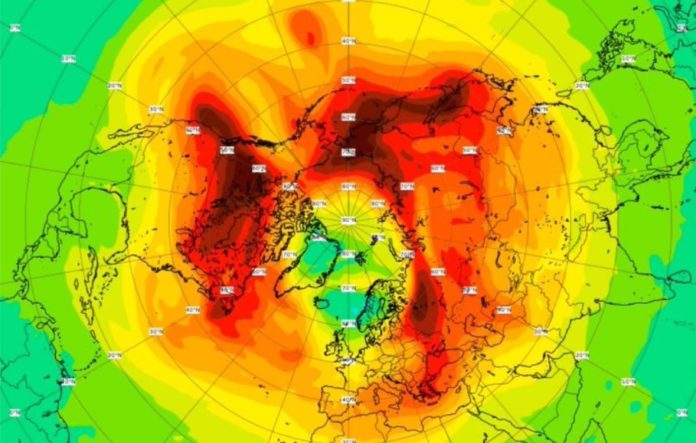 In the statement made by the European Space Agency (ESA), it is said that the ozone holes formed annually on the Arctic will close until mid-April. It was also announced that the size of the hole this year has never been seen before.

The ozone hole is formed over Antarctica, which is surrounded by huge oceans every year, but an extraordinary opening in the ozone layer was observed this year through the North Pole.

In a statement made by the European Space Agency (ESA); It is said that the huge hole in the ozone layer, which is formed due to extraordinarily low temperatures in the stratosphere above the Arctic, will be repaired in mid-April.

The ozone hole will close in mid-April:
In the statement made on the website of the European Space Agency, the following statements were made: “Since 14 March, the ozone column on the Arctic has been shrinking to a dimension considered normal ozone hole. We expect the hole to close again in mid-April. ”

The ozone hole, observed by the satellite called Dentinel-5P launched in 2017, is now 1 million square kilometers. German Space Center researchers base this formation on the extraordinarily cold atmosphere observed in the region last year. ESA said in its statement that total ozone measurements have been carried out on a global scale since 1995. The space agency also announced that they have never observed such a large ozone hole formation over the Arctic during this time.

The holes in the ozone layer that protects the world against ultraviolet radiation are identified with the atmosphere above Antarctica, which is colder than the Arctic. These holes occur at the coldest points of the winter season. These holes expand between 20 and 25 million square kilometers and stay there for 3/4 months.

Russia launched its satellite for internet from space!

Revealed that Planet Shell Began To Move 3.2 Billion Years Ago