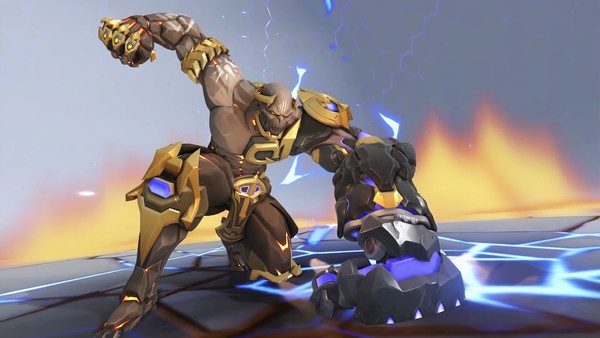 Overwatch will get a new skin for the character Doomfist in honor of the San Francisco Shock victory in the Overwatch League 2019. The news was revealed by Blizzard Entertainment last Tuesday (24), and the so-called Thunder Doomfist will be available for purchase from the next Thursday (26) until April 9, 2020. The skin costs 200 tokens, coins that are purchased by viewers who follow the competition on Twitch TV, and that have the platform account linked to the account developer.

San Francisco Shock was champion of the second season of the Overwatch League after winning 4-0 against the Vancouver Titans in the grand final. With the title, the players took home the prize of US $ 1.1 million (about R $ 5.5 million in direct conversion). The highlight of the San Francisco Shock campaign was DPS Jay “sinatraa” Won, who was chosen the MVP (Most Valuable Player) of the competition.

Thunder Doomfist doesn’t have that name by chance. The word “Thunder” means “Thunder” in Portuguese, a reference that resembles electricity, as the name San Francisco Shock itself. On the skin, the Doomfist’s armor is highlighted by its golden color and is taken by purple crystals, a color that is highly valued in its gauntlet too.

– March 24, 2020
Remember that this is not the first time that an Overwatch League team has received a skin from the developer. London Spitfire, champion of the competition in 2018, received the Flying Ace Winston skin to celebrate their title campaign.

OneDrive Vs Google Drive: See Comparison Between Services In 2022