Home Entertainment Overwatch and Saints Row IV: Re-Elected Among The Games To Play For... 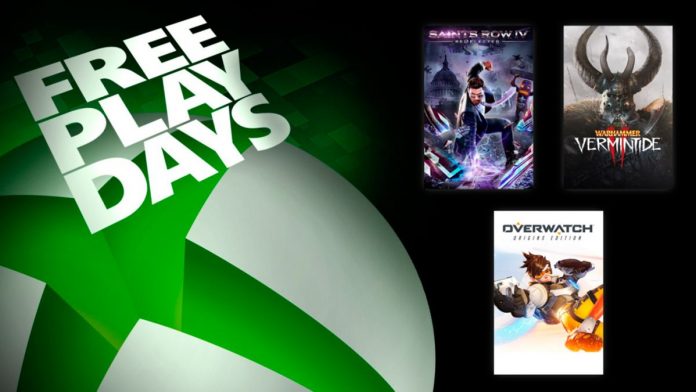 Overwatch and Saints Row IV: Microsoft’s regular Free Play Days promotion features titles available to play for free with Xbox Live Gold or Xbox Game Pass Ultimate.As usual every week, Microsoft presents the games to play for free during the weekend as part of its Free Play Days promotion, available on Xbox consoles with an active subscription to Xbox Live Gold or Xbox Game Pass Ultimate. And the three main titles this week are Overwatch Origins Edition, Saints Row IV: Re-Elected and Warhammer: Vermintide 2, available now and until next Monday, June 28 at 8:59 a.m. And how could it be otherwise, Microsoft offers interesting discounts on all three games for those who want to continue playing after the trial period.

We start with the most popular game of the lot, Blizzard’s celebrated hero shooter that will soon receive its sequel. But those who want to try their original bet and the different novelties that have been coming to the title these years, can now play its Origins version for free. In addition, Overwatch already has the cross-platform play function, which increases the possibilities of playing with your friends. If you want to continue with your online games beyond next Monday, the title is on sale for 19.79 euros.

We continue with Saints Row IV: Re-Elected, the latest and most complete installment of the open world action saga in which we unleash our wildest and most chaotic side. In addition, this version has the visual improvements of the last generation, in addition to all the extra content gathered in the same pack. The game is available for 19.99 euros.

Warhammer: Vermintide 2 is the third free option of the Free Play Days, a cooperative action game in which you destroy the forces of the Skaven and the soldiers of Chaos through an action-focused, first-person RPG, with improvement of skills, level up and much more; It can be purchased for 29.99 euros.