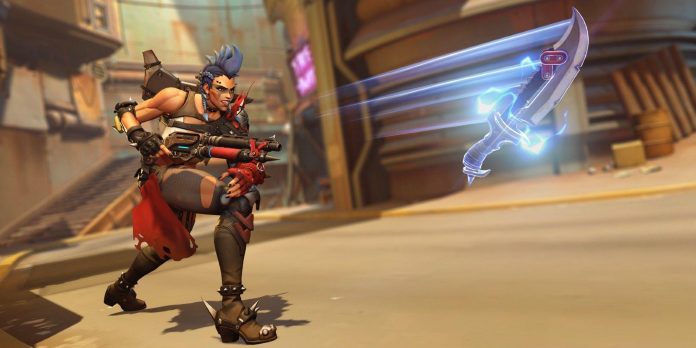 As fans look forward to the release of Overwatch 2 in October, the developers are still working hard on adjusting the characters and trying to balance the game. Fortunately, the beta versions of Overwatch 2 were full of useful information that allows Blizzard to understand which heroes or abilities need to be rebalanced or adjusted for the final version of the game. After analyzing the statistics from the beta versions, as well as looking at the professionals in the Overwatch League, it became clear that one hero in particular needs a better balance: Junker Queen.

Given that Junker Queen is the newest hero to join the Overwatch 2 roster, it would be fair for fans to assume that she has yet to go through the adaptation process. Since Junker Queen became available to play only during the second beta version of Overwatch 2, only a very small number of players managed to try out its devastatingly powerful weapons and abilities, but the general opinion is that the new tank hero may be too strong. Fortunately, the developers also paid attention to the influence of Junker Queen on the game and decided to change its balance before the full launch of the game.

Before she fully introduced Overwatch 2, the developers teased Junker Queen’s set and abilities, some of which piqued the interest of fans. The first notable ability is Junker Queen’s passivity, Adrenaline Rush, which allows the hero to heal himself at the expense of damage inflicted on other heroes with her wounding weapons. Wounding is also a new type of ability specifically adapted to Junker Queen’s skillset, which allows her melee weapons to deal damage to enemies over time. In addition, Junker Queen’s ultimate ability, Rampage, allows her to rush into battle by rotating her melee weapon, dealing wound damage and blocking the healing of any enemy she may come into contact with.

All the abilities of Junker Queen make her a very strong and aggressive hero. Given the new direction of Overwatch 2 and the changing role of the tank, Junker Queen seems to perfectly embody the combat style of combat that the developers want to see in Tanks in Overwatch 2. However, after players got the opportunity to personally experience Junker Queen, it became obvious that her new abilities could make her too strong in melee. Despite the fact that a limited number of players who had access to the second beta version had very little time with Junker Queen, it didn’t take long for fans to master her abilities and become almost indestructible, as well as inflict huge damage.

Thanks to her passive ability and command cry, which allows the Queen of Junkers to heal herself and her closest allies, the Queen of Junkers can survive most skirmishes and often comes out of each match with the most defeated heroes or total damage inflicted. Although tanks often have a large number of kills or damage inflicted, the mobility of the Queen of Junkers, combined with her almost infinite health and self-healing ability, make her almost impossible to fight, which players have noticed. Soon, they quickly noticed not only how often they chose a new hero, but also how destructive her presence on the battlefield was.

Fortunately, the developers of Overwatch 2 also noticed the excessive power of Junker Queen and decided to take it seriously before launching the game in October. The information comes from game director Aaron Keller, who did not specify exactly how the hero will be rebalanced, but said that the Overwatch 2 team is aware of the unbalanced abilities of Junker Queen and “will reduce the overall power of Junker Queen.”. Ideally, rebalancing will affect the survival rate and damage inflicted on Junker Queen, but at the same time will make her a worthy choice for a new tank role.

It is important to note that Junker Queen has been available to professional players in the Overwatch League since its introduction during the second beta testing. Thus, the developers were able not only to see the statistics of random players and internal game tests, but also to observe and analyze how the abilities of Junker Queen affect Overwatch 2 in the hands of some of the best players in the world. Overwatch fans should rest assured knowing that the developers are scrutinizing every new and changed hero to ensure that the game remains balanced, and any other additional heroes that appear in Overwatch 2 will probably receive the same attention so that no hero feels too strong. .

The World Ends With You’s Future Depends On The Fans, According...

Grey’s Anatomy: Recording Begins For Season 18 of The Series