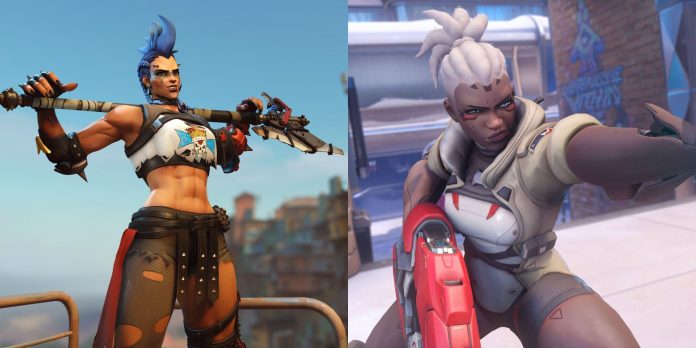 Blizzard Entertainment’s recent Overwatch announcement trailer finally gave fans the news they were looking for in the upcoming sequel, Overwatch 2. The preview acted as a release date reveal announcement, confirming the game would go live later this year as free-to-play on October 4th.

Within the trailer, a new hero known as The Junker Queen was confirmed. Since the announcement of Overwatch 2, fans have been heavily speculating on which characters within the franchise would be possible additions to the roster. With only two fully confirmed heroes to date, there is much room left for new additions – but who has the chance of making it into Overwatch 2, and why?

As the first official new hero for Overwatch 2, Sojourn came as no surprise. Sojourn has been heavily present throughout Overwatch’s lore, and even featured as the commander of the playable Archives Event mission: Storm Rising.

Though many fans were disappointed at her lack of release in Overwatch, developers on Twitch have commented that as she is an integral part of the Overwatch 2 story, the timing of her release in the sequel is the best decision. Sojourn is a Canadian DPS hero and captain of Overwatch, equipped with cybernetic enhancements. Sojourn’s kit consists of a railgun, secondary fire burst shot, disruptor shot, and power slide abilities, which are shown off in her official gameplay trailer.

The Junker Queen is a character traced back in Overwatch as far as the Junkertown map released in 2017. The Junker Queen features in posters around the map, as well as in her voice lines triggered while unlocking the gate at capture point 1. Known for her connections to Junkrat, Roadhog, and Wrecking Ball through Junkertown, the Junker Queen has been highly anticipated for a long time.

After the recent release date reveal trailer for Overwatch 2, fans were delighted to learn that The Junker Queen was finally confirmed as a playable character within Overwatch 2, under the Tank role. Although her ability kit is to be confirmed, she’s shown to have an axe and shotgun that she uses in combat, and it is expected that she will thrive in close-range skirmishes.

There have been many months of speculation for a new hero and spirit fox companion aligned to a leak for Overwatch 2 that gained traction (via Twitter). First hints to the hero occurred in the Kanezaka deathmatch map release, where a fox statue and graffiti were placed within the map. The leak claims there would be a potential new character with lore related to the Shimada brothers, Genji and Hanzo.

Fans were quick to jump back to this leak after the upload of the release date reveal trailer for Overwatch 2. During a brief moment of the trailer, a spirit fox can be seen running through Kanezaka, with three silhouettes chasing after it. Two of these silhouettes clearly resemble Hanzo and Genji, leaving the third mysterious figure confirmed as the “Kanezaka Fox Girl”. The latest YouTube confirmation from Overwatch developers about the upcoming release of new Support heroes was played over the same clip of the Kanezaka Fox Girl, hinting that she could be the first new Support to Overwatch 2.

Mauga is a character that many fans expect to see make an addition to the roster of Overwatch 2. Mauga was first introduced and rumored as a new character for Overwatch back in Baptiste’s short story as a Talon soldier who wields dual machine guns and a barrier.

Interestingly, former game director Jeff Kaplan mentioned that Mauga was in development to be released as a hero for Overwatch (per Streamable). Unfortunately, his ability kit was recycled into the Talon Tank hero, Sigma, and it is unknown if further development on Mauga continued. Mauga has become a huge fan favorite in the Overwatch community and has a history with Baptiste in a best friends-to-enemies dynamic that could allow for some interesting new interactions between the two.

Maximilien has been a well-established character in the Overwatch franchise for a long time as the accountant and co-founder of the antagonistic Talon organization. He has featured in much of Overwatch’s background lore, and is even seen animated and fully voiced within the cut scenes of the Storm Rising mission.

Fans have highly anticipated Maximilien as a potential roster addition for his close ties to Talon, and potential interactions and storylines with other officials. The only obstacle to Max being added to the playable roster is that he has shown very little to no combat skills. Perhaps Max’s cold and calculated strategist qualities could make him a Support hero with a niche toolkit, but as for DPS or Tank – it’s hard to imagine him fitting the role.

It has also been hinted that he may be the leader of Null Sector. This is seen in the matching color scheme and visual aspects that he has in common with the Null Sector bots. This unnamed omnic also has an implied significance in Overwatch 2’s story with Null Sector being the primary antagonist, making him a strong candidate to appear as a new playable hero.

Zephyrus the gladiator is a figure seen in multiple posters and images around the Overwatch 2 map Colosseo. Taking the appearance of a human-operated robot gladiator, Zephryus appears to be a combatant of the Roman Colosseum. Master Ian Gamer uploaded an in-depth speculation and analysis on Zephyrus, which sparked much interest.

In relation to Master Ian Gamer’s analysis, community member YellowDsDuck commented, “Damn, this is actually really convincing. I’m now hoping this hero actually comes out.” Though there are few known details regarding Zephyrus, there have been a handful of scenarios in which in-map images and teasers later sparked corresponding hero reveals.

Mecha themed characters and battles are no stranger to visual entertainment, and Overwatch is no exception, with the fan-favorite MEKA squad. Seung-hwa Shi, otherwise known as Overlord, is one of the five members of the MEKA squad and teammate to existing Tank character D.Va.

Overlord is the youngest member of the MEKA squad and appears to have a Support role, responsible for repairing the Mechs of the other squad members. In the Overwatch: New Blood comic series, Overwatch intercepts a mission gone bad, and steps in to aid MEKA – hinting at a possible alliance between the two organizations and an opportunity for the MEKA squad to be included in Overwatch 2.

Kyung-soo Han, otherwise known as King, is another member of MEKA, and also has a direct link to D.Va as a current teammate, and ex-eSports rival. King could be an interesting addition to the Overwatch 2 roster, and being D.Va’s old eSports rival-turned-teammate could lead to hilarious in-game voice lines and interactions.

Though all five of the mech designs are similar in style, in King’s official concept art his orange-colored mech has a slightly leaner build than the likes of D.Va and D.mon’s mechs, and what appears to be a singular missile launcher. The design of King’s mech likely indicates that King would play a different role, such as DPS or Support.

Jae-eun Kwon, otherwise known as Casino, is the third of D.Va’s four teammates in MEKA. Prior to joining MEKA, Casino was known as an F1 racecar driver with a flashy personality. In Casino’s official concept ar posted to Reddit, he has an aerodynamic mech design that somewhat resembles an automobile, tying into his racing background.

YouTuber Master Ian Gamer completed an analysis and breakdown of Casino, and even speculated that he may work as a playable character without his mech. Commenter GreenFitz added “Due to the size of his mech, it’d have to be his ultimate, something that doesn’t last long but makes up for that with a lot of damage or support!”

Yuna Lee, otherwise known as D.mon, is the fourth MEKA member, and is the strongest candidate for a playable MEKA hero. D.mon has a history with D.Va as her companion and eSports gaming partner, and this is reflected in their matching code names (D.Va and D.mon).

Because of this close link to D.Va, many hope D.mon will be a new Tank playable character added into Overwatch 2. D.mon’s official mech concept art (via Reddit) features a sturdy design with bulky sword and shield attributes, alongside the mech name ‘Beast’, all of which resemble a standard Tank and further mirror D.Va’s hero role.

Sanjay Korpal is a character heavily featured in Overwatch’s background lore and content as a Vishkar Corporation official who secretly collaborates with Talon. Fans have been speculating Sanjay’s addition to Overwatch as a playable hero for as long as four years, and have considered him a possible contender to fit a calm and intellectual Overwatch 2 villain.

Redditor bluelizardK made an interesting statement regarding his toolkit in their comment: “Being a Vishkar head honcho means he has (potentially) access to hard-light, allowing him to be essentially whatever he wants. He could be a spell caster, a support, a melee character with a hard-light sword, a crazy utility character, etc. Anything goes, and it would be so interesting to see the potential hard-light has.” With Sanjay Korpal, the possibilities for his hero kit are endless, and he has huge potential to fit any roles in Overwatch 2.