Home Entertainment Overlord: Who are the best and worst rulers? 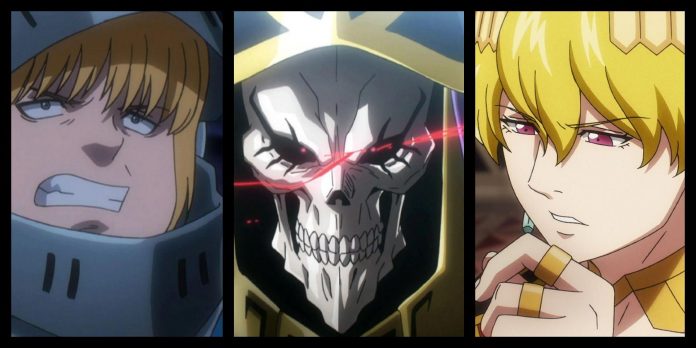 Come alone, come all and witness the battle of kings; hand-to-hand combat of monarchs; rivalry of rulers. Overlord has its share of political states, each with its own internal structure and struggles, but what is a kingdom, empire, or even a tomb without a capable ruler who could lead them?

Although this Isekai fantasy is not as complex as a pop culture icon such as Attack of the Titans, it still has a developed world with a multi-layered political landscape. Some factions are fighting for power in one form or another, while others are just trying to survive. Let’s see which rulers are at the top, who is at the bottom, and who is in the middle. Keep in mind, below are some plot spoilers for those who have not watched the tenth episode of the fourth season.

At the top of the scale is Ainz Ooal Gown, the Wizard King, among other titles. Unsurprisingly, given that he is the strongest protagonist, and most of the story revolves around his faction, the Great Tomb of Nazarick. So what makes Ainz a better ruler compared to others? It would be easy, very easy, to just write it off to the armor scheme, but let’s take a closer look.

Ainz has three things that make him a much better ruler than the others shown in the anime series: his powerful but completely loyal followers, his own overwhelming strength, and his ever-diminishing lack of humanity. Of course, each of them could be broken down into parts and investigated much further, but suffice it to say that the reasons why these factors are so useful for him as a ruler are relatively simple.

Ainz’s followers are strong enough to handle most of the problems without his direct involvement, but they also give him any support he needs and throw him ideas from time to time. Ainz’s extremely high level of strength allows him to solve any problem by overcoming it and doing almost anything he wants without serious consequences. Speaking of consequences, Ainz may not be a Sith lord, but he still has enough apathy for almost everyone outside his faction to make decisions in the best interests of his followers without paying attention to others.

Zirknif Run Farlord El-Nyx is the emperor of the Baharut Empire. Zirknif has some good qualities that benefit him as a ruler, and he even has a threatening origin story. Zirknif is known to many as the “Bloody Emperor”. His mother was from the Five Great Families of the Empire, a group of nobles who once held enormous power as the main leaders of the empire. She was accused of murdering the previous emperor and subsequently killed. To claim the throne for himself, Zirknif had to kill all members of his family for political reasons, but the bloodshed did not end there.

Having ascended to the throne as a teenager, he ordered the execution of many nobles who opposed him, thereby securing the title of bloody emperor. Then, over the years, he made the empire even stronger thanks to his political prowess. While Ainz uses power and light mind games to solve all his problems, Zirknif uses nothing but great brain energy.

Zirknif manages to avoid the lower end of the scale because he was able to make difficult enough decisions to come to power and then strengthen his empire. However, there is little that can compare to the brute force and armor of the plot, so he cannot defeat Ainz as a ruler.

Throughout the series, he fails to outwit Ainz, and he shrinks in the face of Ainz’s power. He even asks that his empire become a vassal of the Sorcerer Kingdom, because he sees no other way to survive. However, he gets points for putting the safety of his people and empire above his pride or desire to succeed as a ruler.

At the absolute bottom of the scale remains Zanac Valleon Egan Rail Weiself, overshadowed by the shadows of the rulers above him. Zanac is a pathetic case, but not for lack of effort. Admittedly, Zanuck had one of the most difficult political realms to maneuver, especially without Ainz’s magical power or Zirknif’s utilitarian ferocity. Zanak was the second prince of the Kingdom of Re-Estiz, a kingdom rife with internal strife between various noble and political parties.

After the Wizarding Kingdom declares war on the Kingdom of Re-Estiz, except for one condition that King Rampoza III is too noble to accept, Zanak takes the throne from his father in a rather peaceful coup. He then heads to the battlefield with his soldiers and talks to Ainz alone before being told that Ainz refuses to end the war with the kingdom. As soon as Zanuck’s soldiers receive the news, they beg him to surrender, to which he refuses. They then decapitate him and offer his head to Ainz in an attempt to save themselves. Little did they know that this has rather unpleasant consequences, and Ainz sends them to one of his followers to be tortured until they beg for death.

Pokemon Scarlet and Violet should fix a serious problem with the...