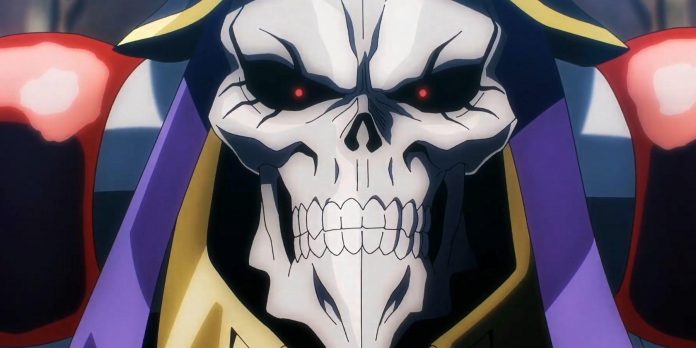 Overlord is one of the latest series to have emerged from the Isekai genre, but unlike some others that have faded into obscurity, Overlord has managed to hit a stride with four amazing seasons. The anime series Overlord first debuted in July 2015, adapted from a light novel of the same name. The story follows a typical salaryman, Momonga, after he plays an online MMO called Yggdrasil up to its very last moments and finds himself transported to a new world along with his old guild’s headquarters, the Great Tomb of Nazarick.

Each season has been filled with action, interesting characters, and political intrigue. The current season, which is the fourth of the series, began airing last month, but without a recap of the biggest events so far, viewers are likely to spend the first episode with a bad case of whiplash.

RELATED: The Best Summer 2022 Anime & Where To Watch Them

And So it Begins

The series follows Momonga, or as he’s known in the new world, Ainz Ooal Gown. The tomb of Nazarick has far too many characters to keep track of, but the floor guardians get a generous amount of screen time each season compared to the other inhabitants. Nazarick’s most prominent floor guardians include Albedo, Shalltear Bloodfallen, Demiurge, Cocytus, Aura Bella Fiora, Mare Bello Fiore, and Pandora’s actor.

Carne village, a nearby settlement, is attacked by a group of knights from the Slane Theocracy, a religious nation neighboring Nazarick. Ainz saves the villagers and Gazeff Stronoff, the warrior captain of the Re-Estize Kingdom. Re-Estize is a neighboring monarch nation troubled by constant political disarray and one of three nations surrounding Nazarick.

After tracking Clementine to a cemetery, Ainz defeats the necromancer with a crushing body lock. That’s right, Ainz is so overpowered he literally killed a primary antagonist of the season with a bear hug. Ainz also meets the giant hamster creature known as “Wise King of the Forest”, scares her into submission with one of his skills, and names her Hamsuke before she joins Nazarick.

While on a solo mission of sorts, Nazarick’s resident vampire Shalltear encounters the Black scripture, a special forces unit of the Slane Theocracy, and they use a world-class item to drive her into a mindless rage. In the new world, world-class items are extremely powerful magic items that each have different abilities.

Shalltear’s murderous rampage leads Nazarick to believe she’s betrayed Ainz Ooal Gown, and he faces her in a no holds barred battle, hoping to free her from her mind control. After defeating Shalltear and resurrecting her, Ainz is promoted to an Adamantite adventurer having received credit for defeating her as Momon.

After seeing how easily a world-class item can threaten Nazarick, Ainz focuses on a new goal: strengthening the tomb. From Albedo’s suggestion, he sets his sights on the Lizardmen tribes of the great lake to serve as part of his army. Thus begins this season’s focus on the war between Nazarick and the Lizardmen tribes.

Ainz sends a harbinger of doom to each of the five Lizardmen tribes. Nazarick’s undead emissary informs each of the tribes of an impending battle eight days away. Zaryusu Shasha, a lizardman from the Green Claw tribe, travels to the other tribes to form an alliance.

After winning them over and finding love with the Red Eye chieftain, Crusch Lulu, Zaryusu joins the new Lizardmen alliance in a battle against Nazarick warrior Cocytus and his army. The Lizardmen win the first battle, but lose the war after the leaders fall to Cocytus in a duel. Ainz resurrects the lizardmen leaders who were killed in the fight against Cocytus and the lizardmen officially fall under the command of Nazarick.

While in the capital, Sebas rescues a young woman, Tuareninya Veyron, from “Eight Fingers”, a despicable crime syndicate. Sebas encounters Eight Fingers several times, defeating them each time and befriending Brain and Climb, two human warriors, in the process.

Demiurge initiates a plan to further spread Ainz’s fame as the adventurer Momon. The plan begins with the goal of destroying Eight Fingers as retribution for their attacks on team Nazarick.

Demiurge pretends to be a demon named Jaldabaoth and attacks the royal capital with several Nazarick members. The plan culminates in a staged final fight between Ainz as the adventurer Momon and Demiurge as the demon Jaldabaoth. Ainz defeats Demiurge, who retreats with all of the Nazarick members and Momon is praised as a hero of the empire.

The Beasts Come Out At Night

The third season begins with an update on Carne Village from the first season and the new conflict they face after Hamsuke’s absence from the Great Forest of Tob has caused a shift in the balance of power. The Giant of the East and the Demon Snake of the West have essentially partnered to control the forest.

Ainz faces off against the two new monsters controlling the forest and easily bests them both. The Giant of the East’s forces still attacks the village and Lupusregina, one of Ainz’s battle maids, helps the villagers in defeating them.

The tomb of Nazarizk is explored by a few adventurer groups hired by a mysterious noble. It is later revealed to viewers that the groups were hired by the Baharuth empire, the last of the three nations surrounding Nazarick.

It is further revealed to viewers that Ainz had convinced Fluder, the Baharuth Empire’s Imperial Court Wizard, to trick Jircniv into secretly sending groups of adventurers on an exploration mission to the tomb of Nazarick. Ainz wished to wage war with the Re-Estize Kingdom to gain land and be recognized as a new kingdom, the Sorceror kingdom.

After Nazarick makes quick work of the intruding adventurers, Ainz sends Mare and Aura to the Baharuth Empire to pressure Emperor Jircniv into owning up for sending the adventurers. Jircniv gets a peek at Nazarick’s unimaginable power firsthand when he meets with Ainz at Nazarick to apologize for its invasion and form an alliance. Jircniv becomes convinced that his empire’s only hope for survival is to play nice with the Sorceror Kingdom and secretly ally with other nations to build an alliance strong enough to defeat Ainz.

Overlord takes another opportunity for Ainz to demonstrate his nearly divine power as he uses high-tier magic more powerful than anything the humans have ever witnessed. After this overwhelming defeat, the Re-Estize Kingdom cedes the city of E-Rantel to Ainz.

Robert Downey Jr. Will Play A Variety of Roles In New...