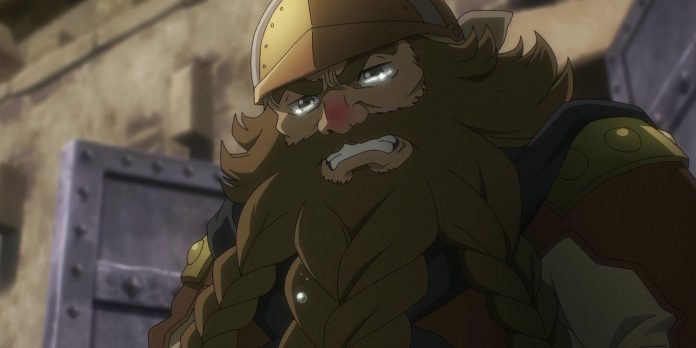 The current storyline in Overlord IV has some very interesting elements based on the knowledge of the series, and also gives us something that was quite a bit this season; combat.

After Shalltear’s performance as the best player in the previous episode, Ainz’s group heads to Feo Jera, the current stronghold of the Dwarf Kingdom, where they intercept more of the same beasts as before: Quagots. Their goal was to attack the dwarves in their current place of residence, forcing them to return to Feo Raido, the city they left before moving to Feo Jera. Ainz uses this opportunity to put the Wizarding Kingdom and the Dwarves on the right track.

How to deal with the threat

The dwarves have fled conflict and death several times, the first time from the ancient capital of the dwarf kingdom, Feo Berkana. The Quagots once existed as eight warring clans; however, they united under the leadership of one clan leader, Ryuro. This makes them more organized and dangerous to the dwarves, as the coordinated attacks of the Quagots left them with only one unconquered underground city.

Since Ainz’s group arrives just in time to see the first wave of Quagots advancing towards the gates of Feo Jer, the dwarves naturally fear the presence of the undead in their underground city, but accept help when Ainz offers. The two death knights summoned by Ainz prove to be too strong for the Quagots; however, their leader uses his wits to defeat them both at once, which later surprises Ainz.

After receiving an audience with the council, Ainz explains the reason for his visit, promising to help them deal with the Quagots and even return their ancient capital. For trade, Ainz offers fresh produce and products that are not easy to get in the underground network of caves of the Dwarf Kingdom. In return; however, Ainz asks to give every last runesmith in the Dwarf Kingdom permission to enter the Sorcerous Kingdom. The council consists of eight members, each of whom has his own doubts about Ainz, but for the most part they are hidden until he leaves the room. One of the council members had a particularly cynical look, he rejected Ainz’s desire to establish friendly relations with the Dwarf Kingdom without any ulterior motives.

Despite the fact that they accepted Ainz’s terms, in the end the council asks to allow a group from the Kingdom to go to the Sorcery Kingdom to ensure the safety of the last rune smiths, which Ainz fully understands. He promises to allow the Gnome Kingdom’s delegations to check the status of future migrants. Ainz is inspired to create non-exploitative working conditions, which does not convince the council; however, when he talks to the rune smiths themselves, he can touch them in a way that greatly impresses Shalltear. There is also the fact that Ainz used a lubricant for society, that is, alcohol, and presented a sword that he received from the merchant Oska.

The limits of craft

When Ainz shows a blade inscribed with runes, there is awe on their faces. When he asks if it is possible to fill a weapon with twenty runic symbols, the dwarves tell Ainz that the maximum that has ever been done is about six runes per item. This strengthens Ainz’s belief that the runes as they currently exist should have appeared under the influence of another player like him.

Despite the limitations explained by the rune masters, they all have an inspired sparkle in their eyes when Ainz tells them that he wants them to go with him to create incredible tools and weapons. After that, Ainz informs Gondo that the mission has been completed successfully, and Gondo is brought to tears because of the Council’s decision to let the long history of creating runes in the Dwarf Kingdom die. Ainz comforts the crying dwarf, telling him that the garbage of one country is the treasure of another and that it is just another element in the history of the creation of runes.

To the promised land

The last step in establishing friendly relations with the Dwarf Kingdom is to deal with the Quagots, cross the dangerous landscape and return the ancient city of Feo Berkana, the first capital of the kingdom. Despite the protests of the dwarves present, Ainz and his small group set off on a journey, well aware of the danger. Using his magic spell “Mass Flight”, he transports himself and his comrades through a huge abyss, which turns out to be the first of several dangers that await them. If Ainz can return Feo to Berkan, the absolute loyalty of the dwarves and the friendly relations between the Wizarding Kingdom and the Dwarf Kingdom will really strengthen.