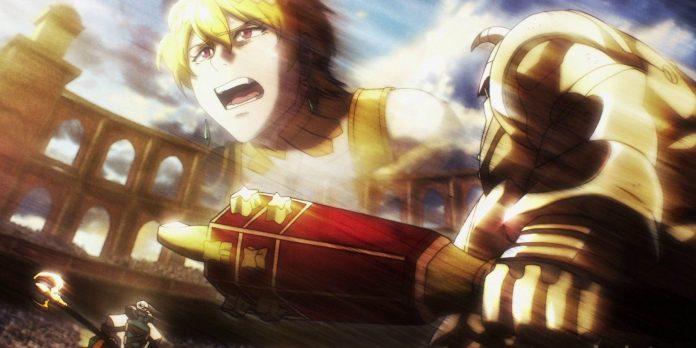 The third episode of Overlord IV focuses mainly on the human actors in the region reacting to the movements of Ainz Ooal Gown and the Sorcerer Kingdom. Jircniv Rune Farlord El-Nix, Emperor of the Baharuth Empire, having witnessed the power of Ainz on the battlefield first-hand, decides to conspire with various other human factions to have the newly-emerged Sorcerer Kingdom destroyed. However, it is this first-hand knowledge that makes the Bloody Emperor ultimately come to understand one truth: he cannot outsmart Ainz Ooal Gown.

The previous episode set up Albedo’s activities in Re-Estize, as well as an upcoming secret invasion of the human Kingdom by the Sorcerer Kingdom. This episode continues Overlord IV’s foundational atmosphere, showing the toll of the stress of existing as a human in the wake of the Sorcerer Kingdom’s establishment, especially after Ainz’s single-handed defeat of 70 000 of the Kingdom of Re-Estize’s military numbers at Jircniv’s request.

The Massacre on Katze Plains

The event known as The Massacre on Katze Plains refers to an incident which occurred during one of the annual skirmishes between forces of the human factions of the Kingdom of Re-Estize, and the Baharuth Empire. The Baharuth Empire, led by Jircniv El-Nix, settled on waging annual wars with the intention of slowly wearing down the military might of Re-Estize; however, with the help of the newly formed Sorcerer Kingdom, Baharuth waged war with Re-Estize over the city of E-Rantel, which is now under Sorcerer Kingdom control.

The incident saw the deaths of 70 000 enemy units, but when Ainz summoned the Dark Young, Level 90 monsters from Yggdrassil to massacre the Kingdom’s Army, the Imperial Army’s horror at the incident led them to run away from the battlefield, trampling each other to death in the process. The Slane Theocracy, one of the oldest human nations of the New World, fears the undead, but even more so when the Thousand Leagues Astrologer, the 7th Seat of the Black Scripture of the Slane Theocracy, falls into despair after her precognition of Ainz’s actions on Katze Plains.

The Slane Theocracy believes in human supremacy, and cannot accept the emergence of a kingdom of inhumans, particularly one that poses as much as a threat as one led by Ainz Ooal Gown. The Six Cardinal Leaders of the Slane Theocracy host a meeting in which they discuss the way forward, deciding that they cannot let the Sorcerer Kingdom exist. This decision is also inspired by the descent into despair of the Thousand Leagues Astrologer, whom they believe saw a horror far worse than anything conceivable, rendering her unable to leave her chambers. This also prompts their holding of a meeting with various other human factions, namely the aforementioned Emperor Jircniv of the Baharuth Empire, but also the religious territory of the Roble Holy Kingdom, which neighbors the city of E-Rantel; and the Argland Council State, a nation of demi-humans located northwest of E-Rantel whom the Slane Theocracy want to be allied with due to their proximity to the city.

Jircniv arranges a meeting with leaders from these various factions at a coliseum that he believes will be out of sight; however, he is shocked to hear that the warrior challenging the current champion is none other than Ainz Ooal Gown; leader of the Sorcerer Kingdom, the undead whom he is in the middle of betraying. Realizing that Ainz is well aware of his thought process, and that he may have even planned for this specific turn of events, the pathetic emperor can only hope that the champion somehow pulls a victory from this battle. Ainz even goes as far as to show up in front of the Emperor and his guests to have a little chat with him and ask him about his friends. Jircniv is unable to hide his fear, but attempts to keep it together. The guests tell Ainz that they are in a hurry to leave and will introduce themselves to him at another juncture, before making their swift escape. The air is heavy, as Jircniv realises just how dire his situation is.

Just like the two episodes before it, the third episode of Overlord IV attempts to set up events that will transpire later in the series, as well as show the impact of the events of the last season on the overall framework of the New World. There are a lot of political movements, meetings and secret gatherings which are not the most exciting thing to engage with. The parts that aren’t so serious are mere filler, such as the prologue of this third episode, which shows the moment Albedo was set to depart for Re-Estize, when Ainz offered her an important artefact – the Ginnungagap, a staff which makes Albedo impervious to the kind of brainwashing that has affected Shalltear.

Before departing, Albedo takes a shot in the dark and asks her beloved Ainz for a kiss, and is driven to tears when he obliges without too much protest. While sweet, the moment seemed out of place in the grand scheme of the episode, which had the main objective of developing more lore about the reaction to the emerging Sorcerer Kingdom in the wake of its terrifying power. Whether the next episode will honour fans’ desire for some action, time will tell.

Chicago Fire: The new role of Yuri Sardarov in the famous...