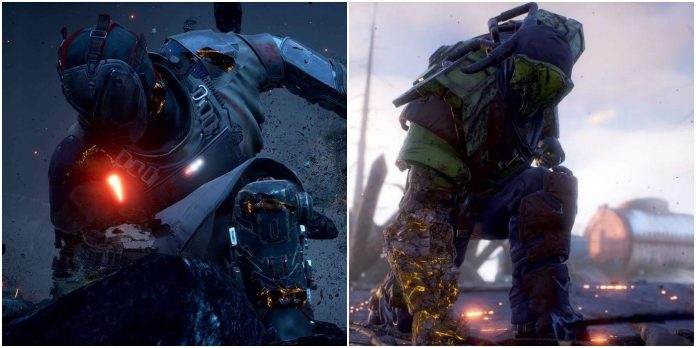 For those who have experienced the end-game excitement in Outriders, it’s no secret that the Warden Devastator is the most difficult component of the party to find. There are a couple of reasons for this. The first is that the demand for them is high; it’s the best tank in the game right now and beating the high Apocalypse Tiers requires the best. So as soon as a Warden Devastator looks for a party, they instantly find one.

The second reason is more of a downer; it’s very difficult to find a Warden Devastator because most of them can’t level up on their own. While some say that the Devastator is the best solo class in the game (and they may be right), it takes a very long time to finish the campaign and, without the right guidance, they sometimes fall behind the enemies in terms of damage dealing. With a few pointers, it’s time to give this class build a few tips so that more of them make it to Outriders’ late game where they excel.

Updated on July 4th, 2022 by Hodey Johns: Many will look at the new endgame content, new weapons, and additional talent trees and already get a sense of how the builds have updated since Worldslayer. But this is only a fraction of the equation. The new foes and bosses employ different moves and tactics. These types of targets should not be a second-hand consideration. This build has been updated to account for the new opponents, giving players the skills and gear that best counters anything Worldslayer has to throw at them.

Node Points Effect Per Point Colossus 5 +10% Health Tank 4 +20% Armor Into The Fray 1 +15% Damage Mitigation for 10 seconds when a Kinetic Skill ends Perpetual Motion 1 -15% Kinetic Skill Cooldown Resistance Paragon 2 +20% Resistance Stone Circle 1 Increase range considered close by 4 meters Heirloom Armor 1 When an enemy dies in close range, gain 20% of their armor for 10 seconds Through The Mob 1 +7% Armor per enemy in close range Resist The Mob 1 +7.5% Resistance per enemy in close range Unbroken Vow 1 Heal for 50% of max health instead of dying when taking fatal damage once every 3 minutes Overlord Of The Battleground 1 Gain 10% max health when an enemy dies in close range Mighty Tank 1 Anomaly and Firepower increased by 5% of Armor, up to 40%

Players who have been battle-tested by higher Apocalypse Tiers know that enemies end up getting disproportionately high armor, so stealing their armor with Heirloom Armor gives Wardens the feeling of being a mini-boss. With all of the other nodes, this makes the Warden unparalleled in terms of tanking.

RELATED: Outriders: The Best Build For The Seismic Shifter Devastator

At some point, the armor and health get so high that it’s completely unrealistic to expect taking any amount of dangerous damage except on the highest apocalypse tiers. All of this damage will eventually be converted into damage, yes, but if it was purely tanking, the Warden is a desirable partner, capable of eating up all damage so teammates can fire from safety.

Nodes Effect Hunting season Increase weapon damage by 30% and magazine size by 50% Hardened Increase damage mitigation by 5%, increase damage mitigation by 2% for every enemy in close range, up to 10% Finishing Touch Increase weapon damage by the percentage of ammo missing from the magazine, killing shots replenish 35% of the magazine Strange Surgeon Shots inflict bleed, killing an enemy afflicted with bleed in close range reduces the cooldown of protection skills by 1.5 seconds Overwhelming Force While a protection skill is active, pulses release every 2 seconds that deal 40% of armor as damage.

There is an understandable temptation to try and grab Momentum instead of Overwhelming Force but resist the urge. By following the rest of this build guide, the cooldown on Boulderdash will already be reduced to nothing.

The reason to go this path should be glaringly obvious; not only is the Warden made tankier, but automatic damage occurs based on the Warden’s total armor. Since that number can be near-infinite with the right weapons and skills, the Warden’s damage suddenly becomes likewise near-infinite.

The nature of Ascension points is that every class and build, given the time to farm, can max out every node. So this build only provides an accurate starting point for gamers. After that, the rest of these points have more to do with luxury than necessity.

Armor, Resistance, and Health become the most critical nodes due to the Warden’s need to tank and be in close quarters with enemies that can dish it out. As indicated by the rest of this guide, because the damage reduction can be turned into intense offense, this is a simple choice.

Boulderdash Charge forward, dealing damage and interrupting all enemies in the way. At the end of the charge, deal damage in a small area of effect. Reflect Bullets Put up a force field in front of the Devastator that stops bullets in mid-air. By either recasting Reflect Bullets or allowing the effect to expire, all bullets will fire on enemies that the Devastator is facing. Golem Fortify against 65% damage for 8 seconds.

If anybody is on the fence about where the Warden should rank among the other builds, these skills should put any fears to bed. After the set armor is completed, Boulderdash can be used with almost no cooldown whatsoever, providing a permanent 15% damage mitigation from the Into The Fray node.

RELATED: Mysteries We Hope Are Answered in Outriders: Worldslayer

Reflect Bullets will end up getting a mod that makes it so that players don’t have to channel it. Reflecting damage against ranged attackers takes care of some of the only opponents that are out of reach of the Devastator.

For big bosses, Golem grants near invincibility. Use Golem whenever a high-damage move is about to fire off or forces get overwhelming. It’s raw mitigation, so players can get some use of this even with absurd armor and resistance attributes.

There are lots of great weapon options, but the Deathshield is the one thing that brings this entire build together. Without it, it would be tough to recommend the Warden to anyone outside of group play. But thanks to the Fortress mod, players will end up doing 43% of the Devastator’s armor as damage. Given that players can steal armor from opponents, the Deathshield has a nearly unlimited capacity for damage.

RELATED: Outriders: The Best Build For The Vanquisher Devastator

Replace the second mod on the gun with Golem Rising. Players have discovered that it refreshes the duration of Golem on each kill, potentially allowing the Warden to cast Golem once at the beginning of the fight and gaining the 65% damage mitigation for the entire encounter.

The Deathproof set reduces the cooldown of Boulderdash by 90% ensuring that players will always gain the benefit of 15% damage mitigation. All but three of the mods benefit either Reflect Bullets or Boulderdash, which works well for the Warden.

This leaves three mod slots in need of replacing. To take advantage of Golem fully, use Golem Of Death, Made Of Marble, and Resistance. These make Golem stronger and last longer per kill, enabling a permanent state of Golen so long as enemies are getting killed.