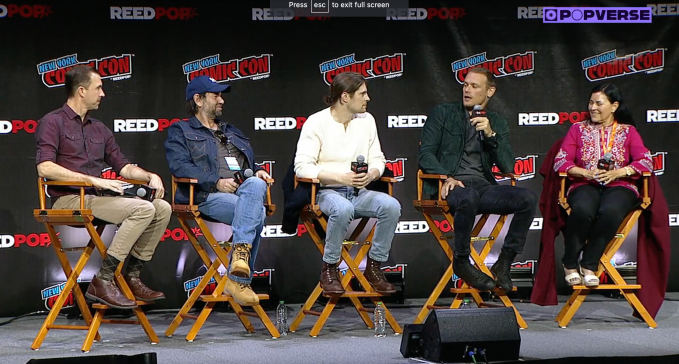 The characters of “Outlander”—Sam Heughan, John Berry and Duncan Lacroix—took center stage at New York Comic Con on Sunday, but author Diana Gabeldon delivered some of the best moments on the panel.

Reflecting on the beginning of the drama on Starz, Gabeldon recalled sitting with Hughan and Katrina Balfe and talking about people who love her books. “I’ve never had a bad fan experience,” she recalled telling the duo. “They are wonderful, smart and kind. Keep in mind, however, that people with a real mental disorder do not have the intelligence to read one of the books. Television is different.”

Gabeldon also made a splash when she explained how she could track the mood on set by watching the daily bulletins from each episode. “I can tell how things are going by how many times Sam or Katrina say f…”.

When Heughan asked her who was talking more, she quickly replied: “Katrina.”

Fans had the opportunity to ask questions to the group, including about the characters of “Outlander” and who everyone would prefer to talk to in real life. Gabeldon had an immediate response to this. “I’d get along best with Jamie,” she said. “I’ve been living with him for 50 years, and we still get along well.”

She says people often ask her why she made Lord John Grey (Berry) gay. “He just showed up like that,” she said simply. And Gray’s love for Jamie will remain unrequited, because “he already has too many people in love with him.” True dates.

But her best comment came when the discussion focused on Lacroix’s long-term perspective, whose character Murtagh Fraser was supposed to die on the battlefield of Culloden, but instead lasted until Season 5. “If we get to season 8, I’ll see what we can do. about Murtagh’s ghost.