Home Entertainment Out of Order: The 10 Funniest Letterboxd Reviews 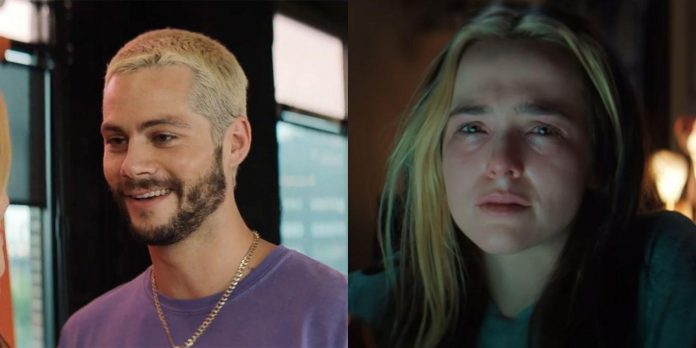 Warning: The article contains brief discussions about suicide and trauma.

Not Okay was released on Hulu on 29th July, and the savage critique of influencer culture has garnered plenty of rave reviews. At the time of posting, it has a respectable 75% on Rotten Tomatoes with many critics enjoying its depiction of social media manipulation and fifteen minutes of fame. With themes of trauma, superficiality, and deception, the film is especially salient to today’s audience.

After Zoey Deutch’s Danni Sanders spins her terrible lie, the façade inevitably cracks as she learns the hard way that the internet loves a fall from grace. Ironically, the internet has a lot to say about her, with thousands of viewers sharing their opinion about the film, just as famous influencers did in their cameos. Letterboxd is one such space for these thoughts, and some hilarious one-liners from these reviews sum up the film.

Dylan O’Brian’s character Colin is the weed editor for the Vice-esque website, ‘Depravity,’ emerging from his office from a cloud of smoke with an elaborate scorpion joint. Danni’s crush on him kicks off her elaborate ruse, only for it to end in tears. Letterboxd user bree chastises Danni, saying: “she really fell for a guy who’s instagram user is @weedboiiicolin… i can’t keep defending her.”

Everyone’s had a crush that they look back on and regret, and this Instagram name is unforgivably cringe. She’s massively let down by Colin when he begins to take a liking to her, and this should have been her first red flag. For Letterboxd user, she sees through Colin’s façade early on, maybe predicting that he’s in fact a poser from Maine.

Letterboxd user Dylan says in all caps, “GODISAWOMANMAN CARRIED,” referencing to Charles’ username, a character whom Danni meets in the support group for survivors of mass violence. Rowan tells Danni that he received trauma as an attendee of the real-life Ariana Grande concert in the UK, where a tragic suicide bombing occurred.

He proudly shouts after Danni that he is known as ‘God is A Woman Man,’ in a play on words of the much-loved Ariana Grande song. The user clearly finds the side character amusing, especially as he tries to befriend a fame-seeking Danni. Though Danni judges him and brushes him off, Charles is thankfully nothing like her and other delusional influencers, as he is unapologetically himself on social media.

The bleach buzz cut-haired Colin is dreamy for some and abhorrent to others. He smokes heaps of marijuana, has lots of tattoos, wears oversized clothing, and has a self-important swagger.  This has led to some comparing Dylan O’Brian’s character to actor-comedian Pete Davidson. Gal Balaban jokes: “Love Dylan O’Brian’s performance of Pete Davidson in this movie.”

As the film is a satire of today’s internet culture, it’s only natural that the romantic interest is modeled after Gen Z’s most sought-after man. O’Brian plays this genre of man effortlessly, maybe a little more over-the-top than the actual Pete Davidson.

Not Okay instantly conveys Danni’s characterization as an aspiring writer but comes off as egocentric due to her tactless nature. Letterboxd user molly highlighted a particular comparison that Danni made, saying, “i knew danni was hopeless the minute she compared herself to Lena Dunham.”

One of Danni’s major character flaws is her tone-deafness in terms of the more progressive world, where at one point, she compares herself to Girls creator and essayist while convincing her editor to publish her conceited essay. The worst part is that Danni acknowledges this comparison, saying, “Can’t tone-deaf be like a brand though, isn’t that what Lena Dunham does?” which is a reference to Dunham’s fair share of controversy with her past insensitive comments. The shocking part is that Danni is self-aware and yet has no issues with this as long as she can earn fame from it, a foreshadow of what ends up happening.

Many Letterboxd users had a lot to say about Dylan O’Brian’s involvement in this film, with many having lasting crushes from his Teen Wolf heartthrob days. Unlike his role in Teen Wolf, O’Brian plays a much different self-absorbed influencer. Letterboxd user lindsay complains: “this movie gave us a dylan o’brian sex scene but at WHAT COST.”

This refers to the stomach-churning scene in which Danni finally gets exactly the kind of romantic attention she craved from Colin, only for it to not live up to what she imagined. He uses vulgar, cringy language, and their encounter hardly lasts long, which explains the user’s reaction. Furthermore, the sex scene portrays Colin as a typical womanizer, prioritizing his pleasure and with no regard for any contraception. It continues to depict Colin as a dreadful and selfish person who only cares for his personal interest, which makes Danni’s pursuits a waste of time and very consequential.

Not Okay has inevitably received comparisons to the musical film Dear Evan Hansen, comparing the plot as both Danni Sanders and Evan Hansen find themselves embroiled in lies that get out of hand, with terrible consequences. While Evan pretends to be best friends with a victim of teen suicide, growing close to his grief-stricken family, Danni bonds with school shooting survivor Rowan as a result of her lie.

User tyler gives the film an alternate tagline:: “the ticktokification of Dear Evan Hansen (2021).” Coining a new word in the process, the user refers to the numerous TikTok references in the film, with Danni using many of the platform’s popular hand gestures and terms of phrase. They also show that the cry for attention in Not Okay is on a much larger scale than in Dear Evan Hansen, as Danni commands all of TikTok to use her hashtag: #notokay.

The unlikable female protagonist had many cringe-worthy moments, as the film sometimes feels like an exercise in second-hand embarrassment. From Danni posting ‘Skin Goals!!’ on a video of Rowan describing the horror of a school shooting to the numerous TikTok gestures she makes in serious situations, she also behaves and reacts in imprudent ways, failing to read the room most times. User chloe had a severe case, she comments: “the second hand embarrassment watching this, sh-t had me opening another browser tab just to check emails at 10pm on a Friday night.”

The feeling of being embarrassed on someone’s behalf is not pleasant, so it’s understandable that the Letterboxd reviewer had to tune out for a minute or two. However, since her journey to fame quickly sinks with her confession, it does show Danni as a more complex character who sees the true consequences of her actions.

Letterboxd user marcelina makes an excellent observation: “No wonder, she has a black swan poster in the room.” A movie poster for the 2010 thriller Black Swan can be spotted when Danni goes back to her childhood bedroom after her ‘traumatic experience.’ It can be assumed that, as a fan of the Darren Aronofsky film, she looks up to the character of Nina, a ballerina who goes to extreme means to gain the role of a lifetime.

RELATED: 10 Subtle Clues About The Twist Ending In Black Swan

It is possible that this small detail may have predicted Danni’s ending as she deals with the repercussions of fame. In some ways, Danni does emulate the extreme dedication that Nina goes through in the movie, fulfilling their dreams regardless of the ramifications.

User belle has a unique yet understandable takeaway from the film. She stated that she is “tempted to buy a long-haired guinea pig now,” clearly inspired by Danni’s hilariously named pet, Guinea Weasley. In a nod to the Harry Potter franchise and Ginny Weasley, this reference is a hint to her cusped status as being on the cusp of both millennial and Gen Z generations.

The guinea pig is undeniably cute and is Danni’s only companion at the beginning of the film as she talks to her endlessly. It wouldn’t be surprising if sales of the adorable pet increase after the film’s popularity, ironically showing how influential today’s media can be.

Danni makes many mistakes throughout Not Okay and doesn’t handle her apologies very well, too. She is a delusional influencer, tone deaf at the best of times. For example, she compares Rowan and herself to Katniss and Rue from The Hunger Games, forgetting that Rue dies in the film. Reviewer emma has some simple advice for Danni going forward: “read the room babygirl.”

If Danni stops thinking of herself as the main character – ironic since she literally is the main character of Not Okay – she can successfully ‘read the room’ and think more carefully about her actions and how they affect others. It’s a message that she doesn’t comprehend until the final moments, where she finally realizes what her actions have done and, for once, considers others’ feelings during a crucial period.

Telltale Games refuses to say whether The Wolf Among Us 2...