Home Tech Our Christmas games 2020. We wish you happy holidays 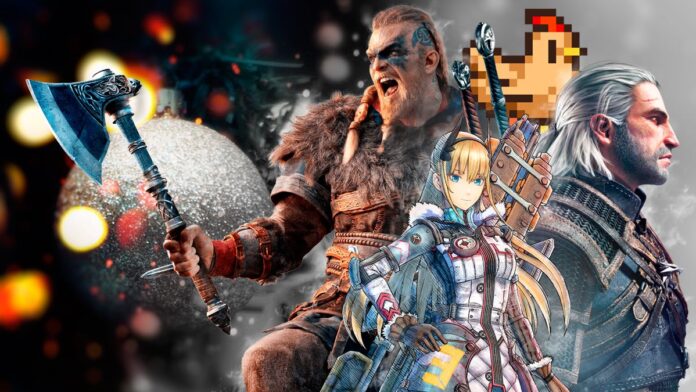 We share with you those titles that we are going to play these days while we wish you happy holidays As every year, from the writing of we congratulate you these holidays by sharing with you that game that occupies our free time on these special days.

Throughout the year I have been playing and enjoying one of the best games of recent times: Valkyria Chronicles 4. It is a game that collects the essence of a PS3 top, the first Valkyria, and a title that overflows quality by four sides. With the arrival of the new consoles and the end of the year work it has been impossible for me to continue with it, but I hope to continue and finish it these days or early 2021. Its spectacular artistic direction is accompanied by brilliant gameplay, even for those of us a few packages in this of the strategy. How the story tells and how it gets complicated, the combination of units and strategies to follow, the new enemies that appear and above all the epic that grows with each mission (after the fifth chapter, the game definitely takes off) make make it an essential of the generation. Give it a try, even if you don’t like the genre. Although you have never played the saga. You will like.

Call of the Sea —Borja Ruete

In winter, with cold and a blanket, I will play a video game that will transport me to a tropical island. The Spanish studio Out of the Blue Games has developed Call of the Sea, one of the great surprises for Xbox One, Xbox Series X, Xbox Series S and PC. This work is set in the 1930s, but no one expects cities or jazz clubs. We drive to Norah, a woman who travels to a distant island in search of her missing husband. After leaving the ship behind, she soon discovers that she is not in just any place, as she seems to have a life of her own. The developers have built an ingenious puzzle title, which drinks from Lovecraft and is steeped in adventure cinema to delight us with a product that is as fun as it is challenging. I have already been able to try it for a few minutes, but at Christmas I will take the opportunity to finish it quietly. It is what I look for in those dates, short and rewarding experiences.

Almost 10 years after playing the original I return to Boletaria thanks to this fantastic remake by Bluepoint. And to suffer again, even more, because I feel that the younger ones discover reality, but the skills in command diminish with age … I can well attest it, and it is that every minute From Software makes sure to remind me because its formula is the most influential of the last decade, and it is to be recognized the merit of having made a proposal like this at a time when video games were little more than a walk in the park.

On PC since last year, it wasn’t until the end of September 2020 that Rebel Galaxy Outlaw arrived on consoles. I’m really enjoying it on Switch, which is a great port and I have the advantages that the portable format offers me. The game, which takes to the particular the general of the previous installment, focuses on a character and his ship. Gone is the expansive Rebel Galaxy of 2015, where conflicts were large-scale and more strategic. In Outlaw we smell the old scent of the pages of Metal Hurlant and its old stories of space scoundrels. Ragged characters moving on the outer and abandoned edge of the galaxy. Outlaw also smells like a seedy joint, from sidelong glances from the bar counter while we play a game of pool and country sounds from rickety speakers. Direct action in space, bounty hunters and shenanigans here and there. Lots of systems to explore, with space stations where we dock our squat and ramshackle novelty pulp ship. Wait, have you seen? I think those two guys gave the bartender a suspicious signal while looking at us. Get out first. We meet in the hangar. If I don’t show up in ten minutes, you know you’ll have to find another partying partner.