Home Entertainment Other visual Novels for Nintendo Switch, if you liked Digimon Survive 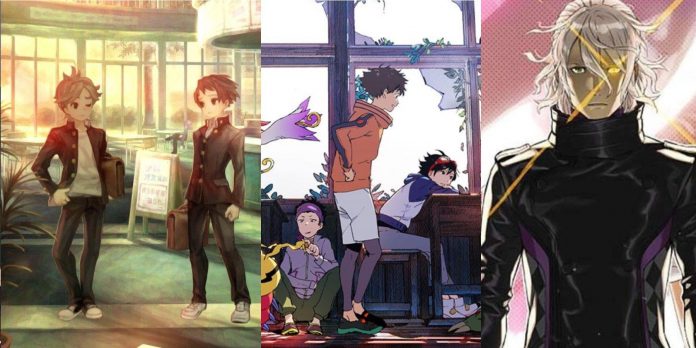 Digimon Survive, the latest game featuring the titular digital monsters, surprised many fans by utilizing visual novel elements rather than remaining a strict role-playing or action game. Described as a hybrid between a visual novel and a tactical role-playing game, Digimon Survive tasked players to make the right choices as they traversed through a dramatic story alongside a large cast of both humans and Digimon. Many players who enjoyed the game found themselves seeking out other visual novels to play next – and the Nintendo Switch is the perfect console for such an endeavor.

Although it does feature combat, Digimon Survive draws many elements from the visual novel genre. Between battles, players experience the game’s story in “Drama Parts,” in the form of a text-based adventure. They can also talk and interact with other characters during “Free Action” and use “Search Actions” to seek ways to survive in the mysterious world they are trapped in. Player choices affect everything from how certain Digimon Digivolve to which characters survive the game to which Digimon Survive ending they ultimately arrive at. Those who found themselves appreciating these visual novel elements can further explore the genre with the Nintendo Switch, as the hybrid console has seen the release of a number of visual novels both classic and contemporary.

Some fans and critics have already made comparisons between Digimon Survive and 13 Sentinels: Aegis Rim, as both are considered to be hybrid visual novels with elements of other genres, including tactics-based combat. Players looking for an experience most similar to Digimon Survive should give 13 Sentinels: Aegis Rim a try, as the 2019 release – which debuted for the PlayStation 4 before eventually making its way to the Nintendo Switch in 2022 – also alternates between text-based visual novel-inspired scenes featuring dialogue choices and tactical combat maps.

13 Sentinels: Aegis Rim tells a complex story based around time travel. It centers around the titular thirteen characters, each of whom discover that they are capable of piloting giant robots called Sentinels and must defend the world from attacking monsters called kaiju. The game features a twisty plot that will leave players guessing until the very last moment as they jump between different time periods and gradually uncover the story of 13 Sentinels piece by piece. It is a modern, unique take on the visual novel genre that features nonlinear stories and gives each of its 13 playable characters their time to shine.

Digimon Survive surprised some players with its dark tone, which was unafraid to divert from the more family-friendly storytelling found in some previous Digimon games and much of the Digimon animated television series. Depending on what choices the players make, not every character will survive to the end of the game, and some of their deaths can be unexpected and even disturbing. Fans who were drawn to this darker tone should check out AI: The Somnium Files and its sequel AI: The Somnium Files – nirvanA Initiative, a duology of visual novels created by Japanese developer Kotaro Uchikoshi.

The Somnium Files visual novels center around ABIS, a special investigative unit comprised of detectives who are able to dive into the very minds of witnesses and suspects. Each game tasks ABIS members with solving a grisly serial killing – in the first game, the killer gouges out the eyes of their victims, while in the second, victims’ bodies are found severed completely in half. Gameplay alternates between choice-based dialogue and exploration sections and escape-room style puzzles based around the witnesses’ psyches. Both Somnium Files games are available for PC, PlayStation 4, and Xbox One in addition to the Nintendo Switch.

One element of Digimon Survive that generally received praise was its large cast of unique characters, which includes both humans and over 100 of the titular Digimon. Each Digimon the player encounters offers unique interaction options as the player works to befriend them, and choices made and actions taken can influence how and when Digimon Digivolve throughout the story. Players who connected to Digimon Survive through its large cast of characters would likely enjoy Ace Attorney, a series of deduction and exploration-based visual novels that feature a new set of characters to interact with in each game.

Currently, several games in the Ace Attorney series are available on the Nintendo Switch. The first three games, which feature lawyer Phoenix Wright as the protagonist, can be purchased together as The Ace Attorney Trilogy, while The Great Ace Attorney Chronicles is a duology starring Phoenix’s ancestor Ryunosuke Naruhodo as he solves mysteries in London alongside the great detective Herlock Sholmes. Both of these titles can be purchased together in a five-game bundle called The Turnabout Collection. Other games in the series, including Apollo Justice: Ace Attorney and the Ace Attorney Investigations spin-off games, have not yet made their way to the Switch but may do so in the future.

These are only a few of the visual novels available on the Nintendo Switch. Other options include Famicom Detective Club, a remake duology of two classic titles considered to be among the first in the genre, the mystery-heavy Danganronpa series, and the chillingly twisty Doki Doki Literature Club. Both veteran fans of the genre and those who discovered visual novels for the first time through Digimon Survive can definitely enjoy the wide variety of titles the Switch has to offer.

Digimon Survive is currently available for Nintendo Switch, PC, PlayStation 4, and Xbox One.

The Good Doctor Season 5: Premiere date and what to expect...