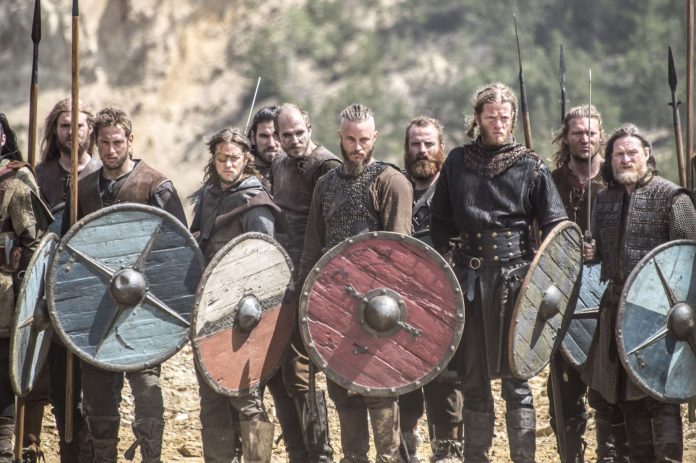 One of the most surprising hits on television is Vikings, the History Channel’s historical drama about marauders from the 8th and 9th centuries who made their way through northern Europe. Creator Michael Hirst has put on an extensive show filled with unique culture, fascinating characters, and brutal battles, all steeped in true history.

Some are about Vikings, some follow other groups of warriors throughout history, and some feature more of the medieval sword and shield battles that Vikings have become famous for.

Of all the shows on this list, The Last Kingdom will be more like Vikings than any other, and it should be your first stop if you’re trying to relive the emotions of Ragnar (Travis Fimmel) and his company. Based on the Saxon stories of Bernard Cornwell, The Last Kingdom almost overlaps with the events of the Vikings (beginning in 793), beginning with the 866 Viking conquest of York.

The hero of the show is Uhtred of Bebbanburg (Alexander Dreymon), a Saxon who is adopted by the invading Vikings and raised as one of their own after the Vikings conquer his homeland, pushing him in two different directions as he has the blood of a Saxon but came of age as a Danish Viking.

As the two shows are loosely based on the same story, some characters appear in both shows at different ages in similar stories separated by a generation of story.

A little tired of all the seriousness of the Vikings, what about all the war, dismemberment, and family members stabbing each other in the back? The wild world of old Norse life slides on a banana peel in this Norwegian-language comedy that tricks Viking culture with a sense of humor somewhere between Monty Python and the Farrelly Brothers.

Although they all wear animal skins and tattered armor, some of the dialogue is decidedly modern. It’s completely silly, but that’s the point of Norsemen.

Following the well-deserved success of Vikings, the History Channel sought out more historical dramas along the same lines, showing that it uses history as a model and then creates an intricate drama around it. Knightfall of 2017 is more like the strategy that History established with the Vikings, this time moving to the 14th century to visit the Knights Templar.

The series follows Landry du Lauzon (Tom Cullen), a disenchanted Templar knight whose faith is once again shaken when he discovers that the Holy Grail, yes, that Holy Grail, has reappeared in France.

Vikings is so successful for history that the network released this companion docuseries in 2016 for fans thirsty for more knowledge of Viking culture. There are only four episodes, but it is a must see for fans who want to explore Viking culture further.

Using behind-the-scenes access, interviews with historians, and conversations with show stars like Rollo (Clive Standen), Real Vikings delves into the history of the Vikings, from their looting paths to their spiritual ceremonies and sea-going technology.

Like Vikings, it intricately details a culture that most of us know more about from Halloween costumes than actual history, with different factions created against each other as they all want the same thing.

It doesn’t have as many battles as Vikings, focusing more on the renegade ruthless strategy of these sea bandits, but when the ships collide in the crystal blue waters, it is one of the best actions ever seen on television.

Very strong! Wanda Nara is seen that in the middle of...

All about the new spin-off of the NCIS universe