Home News Oscar 2020 awards found its owner! A first among the Oscar winners! 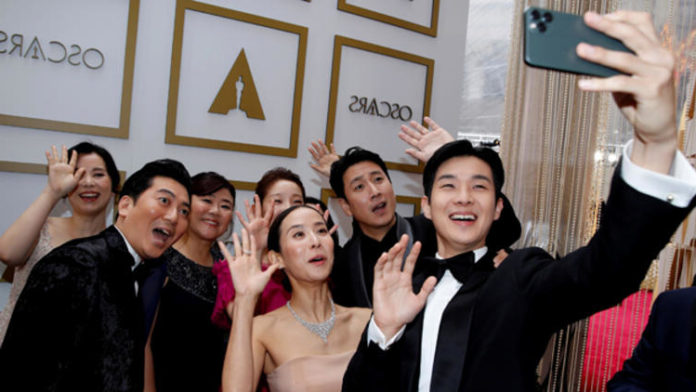 This year’s Oscar awards have been revealed at the Los Angeles Dolby Theater, where many stars are starring and the famous director is present. The production that made its mark on the night of Oscar 2020 was the movie Parasite.

The 1917 movie, where a large audience expected to be awarded in the best movie category, was awarded in the categories of Best cinematographer, Best audio mix, Best visual effects. The film, which won the Oscar award in the best film category, was announced as Parasite. Parasite has made history as the first film in the foreign language, which won the best film award in the 92-year history of Oscar. Another spoken name for the Oscar 2020 award ceremony was Joaquin Phoenix, who received the best actor award for the Joker movie.

Oscar 2020 awards and winners were announced at a magnificent ceremony. The ceremony for the Oscar awards, also known as the 92nd Academy Awards, took place at the Dolby Theater in Los Angeles. The production that marked the Oscar 2020 award ceremony was ‘Parasite’. The best actor award went to Joaquin Phoenix with the Joker movie. The best supporting actor Oscar award was for Brad Pitt with his film Once Upon a Time in Holywood.

South Korean-made Parasite left its mark on the 92nd Oscar Awards (Academy Awards) held this year. Parasite, one of the most spoken films of the year, first received the Best International Film and Best Director Awards. Then he closed the night with the Best Film Award. The fact that Parasite received the film and director awards that everyone made Sam Mendes’s 1917 favorite film went down in history as a surprise of the night.

Another feature of Parasite is that the film, which was first shot in a language other than English, won an Oscar for both the best director, the best film and the best international film. Meanwhile, let us remind you that Parasite, made in South Korea, has achieved surprisingly good box office revenue in the USA. Parasite also stole the hearts of the US audience who do not like to watch subtitles in a language other than their own.

The best supporting actor award was first announced at the ceremony. The result did not surprise anyone, as in the important awards of this year, Brad Pitt won the Best Supporting Actor Award for Once Upon a Time In Hollywood. This is 56-year-old Brad Pitt’s first Oscar for acting. 12-Year Bondage, where Pitt was one of the producers, received an Oscar for best film.

The best supporting actress award did not surprise anyone. With her performance in the movie Marriage Story, Laura Dern took the figurine to her home. This ceremony has a completely different meaning for the association. The master actor first stepped on the red carpet of the Oscar awards as an 8-year-old girl next to his mother, Diane Ladd, who was among the candidates 45 years ago. Laura Dern, daughter of actress Ladd and director Bruce Dern, was at the Oscar ceremony as a 52-year-old woman years later. This time she was accompanied by her mother Diane Ladd and her two children. When the association was announced that she won an award, she hugged her mother and shared her joy.

Best production design: Once Upon a Time In Hollywood

Best short documentary: Learning to Skateboard in a War Zone If You’re a Girl