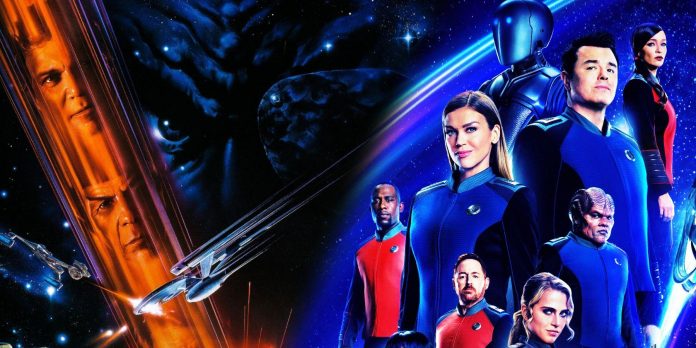 “Orville” is remaking “Star Trek VI: The Undiscovered Country” as it completes its military arc of Kylon ahead of the season three finale. In the penultimate episode of season 3, the Planetary Alliance uses the creation of deadly weapons to negotiate peace with their enemies, the Kylons. The war was an important part of the overall storyline of the third season of “Orville”, informing how the crew members react to Isaac, and adding an additional political dimension to some of the political allegories of the show.

Domino is no exception, and the decision to use this weapon as a negotiating tool is criticized by some Union officers who believe that it should have been used to destroy their enemies. This is another Orville storyline with elements of “Star Trek”, especially “Uncharted Land”. Star Trek 6 solved the difficult issue of peace with the Klingons, to which elements of Starfleet and the Federation had the same objections to the Orville Alliance.

Both “Domino” and “Star Trek 6” tell about the terrifying power of nuclear energy through a sci-fi allegory. The devastating accident that led to the Klingon peace process is an allegory of how the Chernobyl disaster ultimately led to the end of the Cold War. Season 3, episode 9 of “Orville” instead draws inspiration from how the dropping of the atomic bomb led to the devastating end of World War II. The new weapon created by Isaac (Mark Jackson) and Charlie (Ann Winters), like an atomic bomb, is capable of genocide, and the moral and ethical consequences of this inspire the Alliance to seek peace primarily with the Keylons. However, this decision is seen as a weakness in some circles of the Union, and, inspired by Star Trek 6, there is a conspiracy to disrupt this peace process.

The Conspiracy of the Orville Union Star Trek Remakes: The Undiscovered Country

Admiral Perry (Ted Danson) organizes a robbery to steal weapons from a protected facility. He gives it to the enemies of the Union, the Krill and the Moklans, because he believes that they will use it for its intended purpose. It’s similar to how in Star Trek 6, disgruntled Starfleet officers, Klingons, and Romulans conspire to disrupt the Klingon peace process. Which is perhaps a testament to Ted Danson’s charismatic presence on screen, Perry is presented not as a dubious villain, but as a noble man who believes in what he is doing right. The very fact that Danson’s character has had a recurring role since season 2 of “Orville,” episode 5, “The Whole World is a Birthday Cake,” reinforces the sense of betrayal.

Putting a recognizable character at the head of a conspiracy is an interesting twist in the story of Star Trek 6, where the Hitomer conspiracy is mostly conducted behind the scenes. This is partly to focus attention on the last hurrah of the cast of TOS, but it also raises the stakes as Spock and the crew struggle to expose him in order to free Kirk and McCoy. The dark web behind the killing of Klingons in the “Uncharted Land” also reveals the more militaristic aspects of the seemingly utopian and egalitarian Starfleet. This is also true of the Orville conspiracy, when the Union is debating whether they should try to make peace or secure it with an act of genocide.

Ultimately, in both cases, peace negotiations and mutual understanding win. The Kylons and the Alliance join forces to defeat their common enemies, and the Enterprise crew foiled an assassination attempt, ending the Klingon war. In a television landscape populated by dark shows about complex morals with ethically dubious protagonists, Orville’s “Star Trek VI: Uncharted Land” remake maintains the hopeful spirit of Starfleet by portraying the value of peaceful negotiations and compromises.

How the new cast of “Black Panther 2” helped Colleagues mourn...